Undressed: A Brief History of Underwear

Undressed: A Brief History of Underwear exhibition, currently on display at London’s V&A, tells the story of underwear design from the 18th century to the present day, considering the practical and personal, sensory and fashionable and exploring underwear’s roles of protecting and enhancing the body. Address editor Grace Eagle visited the exhibition. 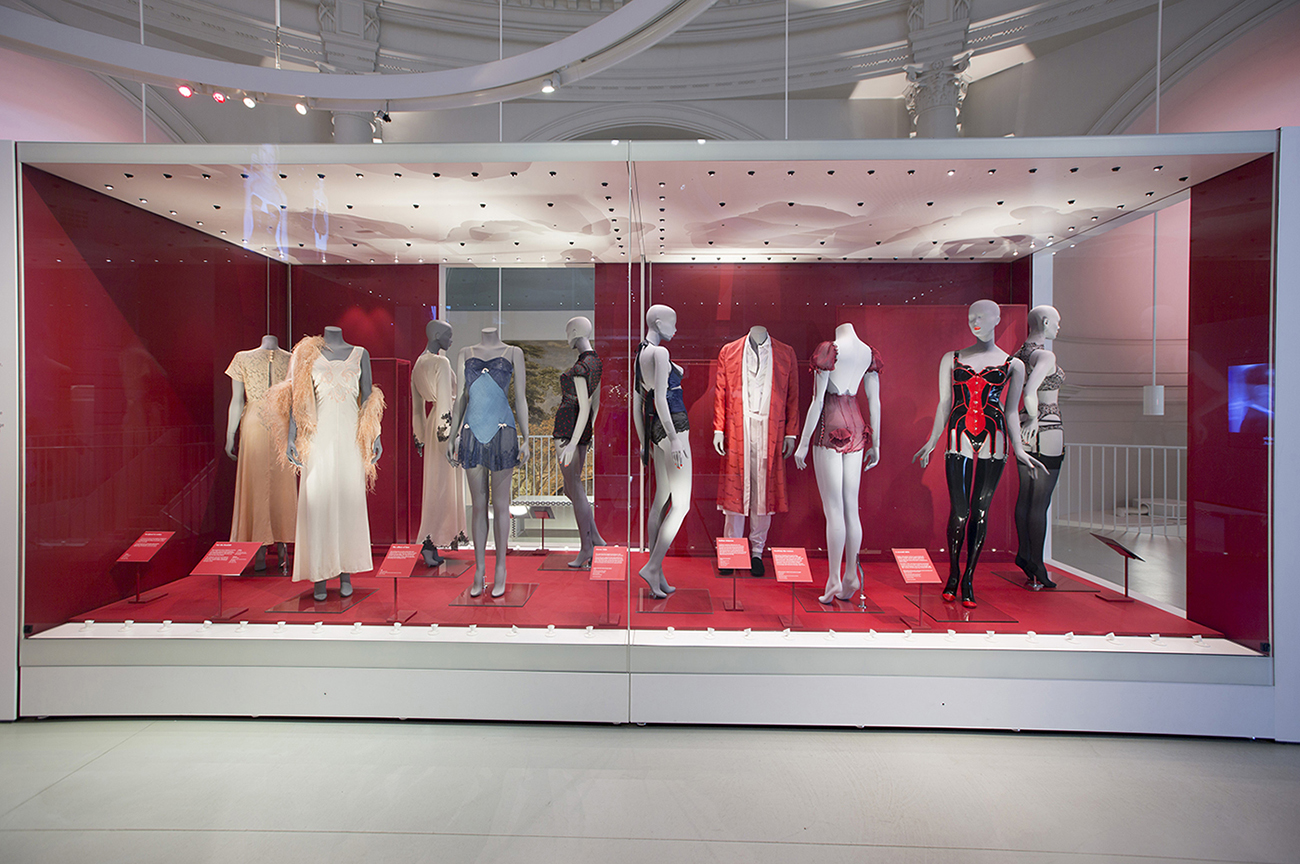 The Victoria & Albert Museum has set the benchmark for fashion exhibitions as exceptional since the likes of the David Bowie is and Alexander McQueen: Savage Beauty shows – all singin’ and all dancin’ experiences. So, expectations are high when visiting, what is to-date, the largest exhibition of underwear ever to go on display.

Edwina Ehrman, curator of Textiles and Fashion at the Victoria & Albert Museum, has assembled a sort-of beginner’s guide to undergarments featuring around 200 examples of which more than 60 items have been recently acquired by the V&A for its permanent collection. Additions are mainly contemporary, including a 2015 butt lifter and waist trainer for women, and a pair of 2015 men’s ‘EnlargetIt’ briefs by Australian men’s swim and underwear manufacturer aussieBum, designed to add volume to the crotch. These pieces sit alongside historical corsets beginning in the 1800s when the wearers had different sets of shape and volume ideals, an extension to male and female form and identity. Hand crafted corsetry, that up until the 20th century, were worn by women of all backgrounds, (and some men) and to go without could lead to a woman being considered as indecent and immoral – even though many doctors advised against the wearing of tight corsets due to the restrictions to breathing.

Many of the recent additions to the collection have been made possible due to advances in technology and fabric processes. The introduction, development and subsequent wider use of chemical dyes, high performance fabrics and complex machine knitting are now widely used for current wardrobe staples such as sportswear as well as brightly coloured every day briefs. The latter displayed as an eight-piece set with the days of the week embroidered on them, plus ‘Happy Day’ following ‘Sunday’. All can be viewed as defining not only the human silhouette but also an era. A bra and suspender belt from the 1950s is an example of dyed nylon, which became popular in the late 1940s for its ease of use as it could be washed and drip-dried without the need for ironing. Nylons’ lightweight strength allowed lingerie designers to create easy to wear structure, a quality the wearer would have appreciated along with longevity. 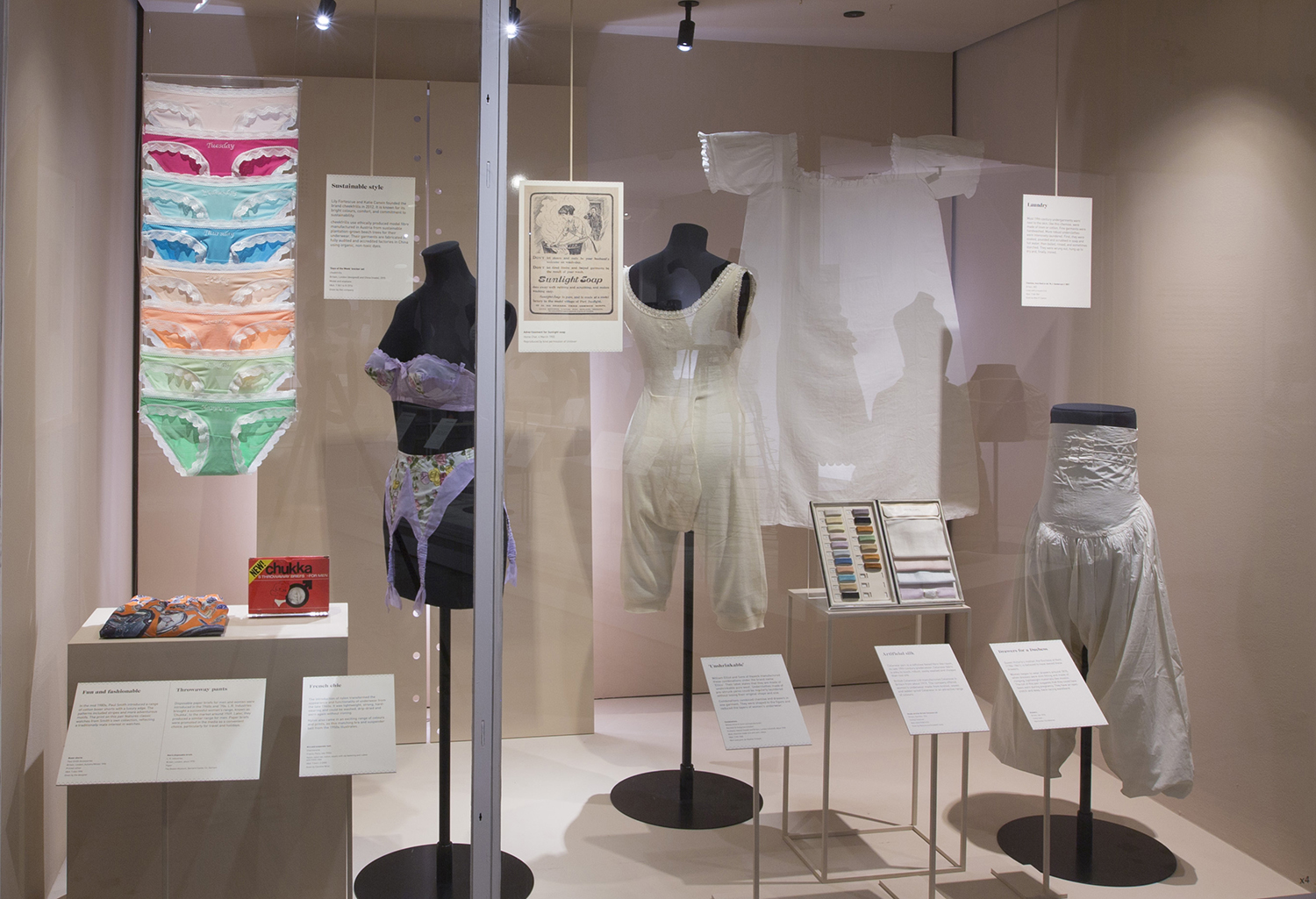 Women’s hand embroidered stays, boned corsets as well as men’s undershirts with pleated sleeves and their own corsets as well as exercise belts from the 18th and 19th century are jaw-dropingly good. Particularly stunning due to its mini size, the use of natural materials and quality of hand-sewn detail is a women’s white cotton and linen stay with whalebone support and silk ribbon laced neatly at the front between gussets to support the breasts. This particular stay is British, made between 1795 and 1805, designed with the high waistline of the time in mind, which by the way, was on average at least (ah-hem, breath in!) likely to be half the size of your waist. It is in stark contrast to the bright red cardboard box of chukka containing 5 throwaway briefs – for men, in the cabinet not far away. Made from paper for men and women in the 1960s and 1970s, these disposable pants were promoted for their convenience, particularly when travelling. It emphasises the theme of the first part of the exhibition: lily pad like jumps between periods, materials, production techniques and styles.

Underwear is practical, hygienic, private, titillating and sometimes just totally mad. A reminder of the said mad comes in the form of crinolines and bustles early on in the exhibition. ‘The New KEELAPSO BUSTLE’ advertised in the London News, 18 June 1887, illustrates a lady who can sit down because she is using the collapsible Keelapso fixed to her derrière and a lady who can’t sit down because she isn’t. The instant reaction could be to fall about laughing, yet as with all ‘fashions’ there are oodles of social and political implications well worth delving into. With more space given to each piece, the question of ‘why?’ could have been explored. 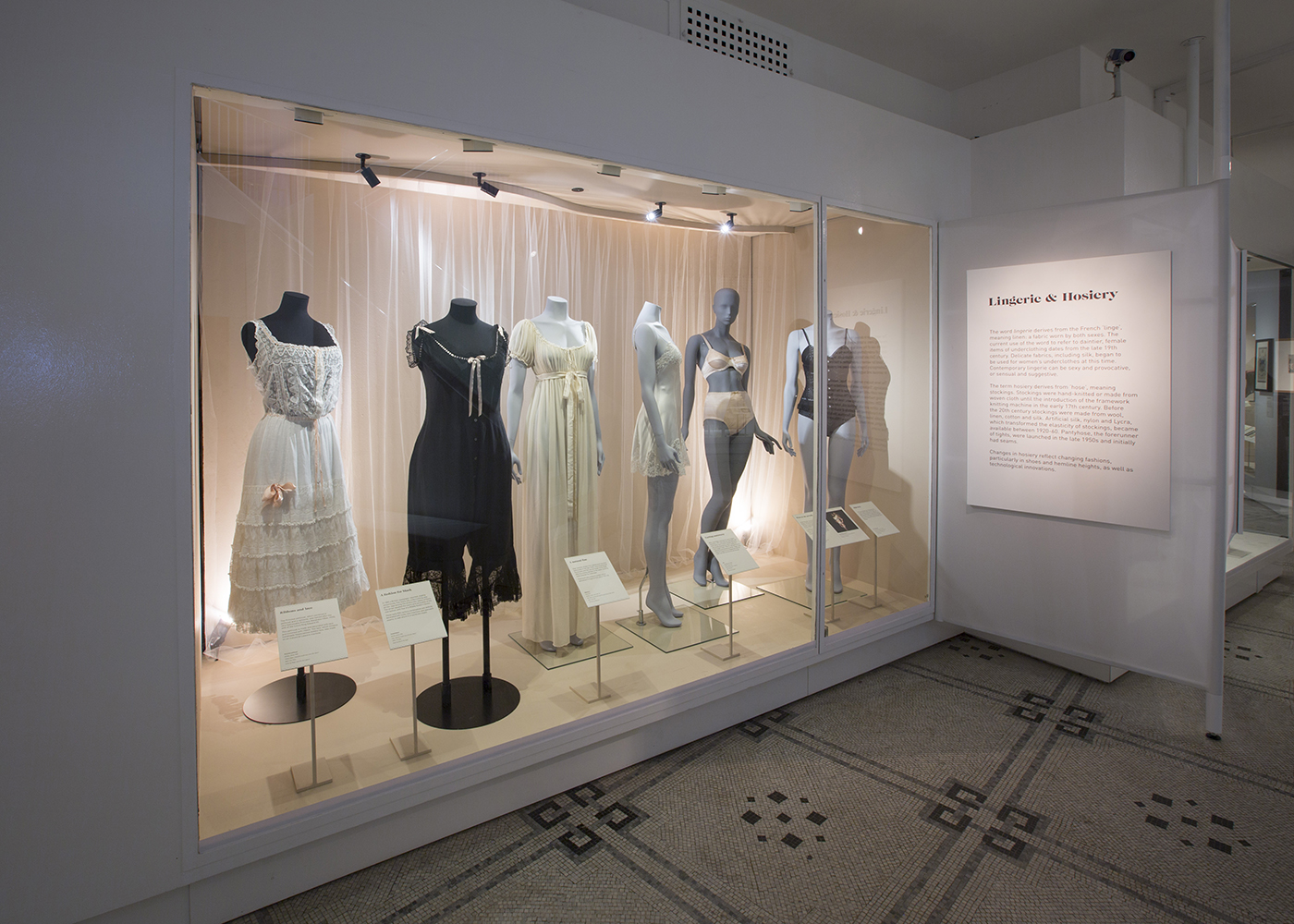 It would also have been useful to see more examples of underwear with clothes on top. After all, besides performance on stage and in the bedroom, most people keep their underwear hidden. It is the silhouette with clothes on top that help define their purpose. There are hip-hop styled jeans with Calvin Klein boxer shorts appearing predominantly out of the top, as worn by Brixton Boyz, photographed by Jennie Baptiste in London 2001, but what about the full impact of the 1950’s pointy bra and large close fitted knickers? The effect is lost without a slim fit roll neck and tight high-waisted skirt or trouser over the top, for example.

The general revival of 1990s style underwear as outerwear is a current trend that would also have been interesting to explore in detail, the reverse of hiding and teasing as it is all on show. On another underwear as outerwear 90s tip: where was Jean-Paul Gautier’s gold lamé coned bra corset Madonna wore on her Blonde Ambition tour? Not in the cabinet with the few performing artist’s garments featured. But, Dita von Teese’s Swarovski crystal embellished corset designed by corset maker Mr. Pearl, is on show. A very different kind of stunning to the earlier handcrafted natural linen pieces, with all the bling it is as much of a spectacle from the back as the front. 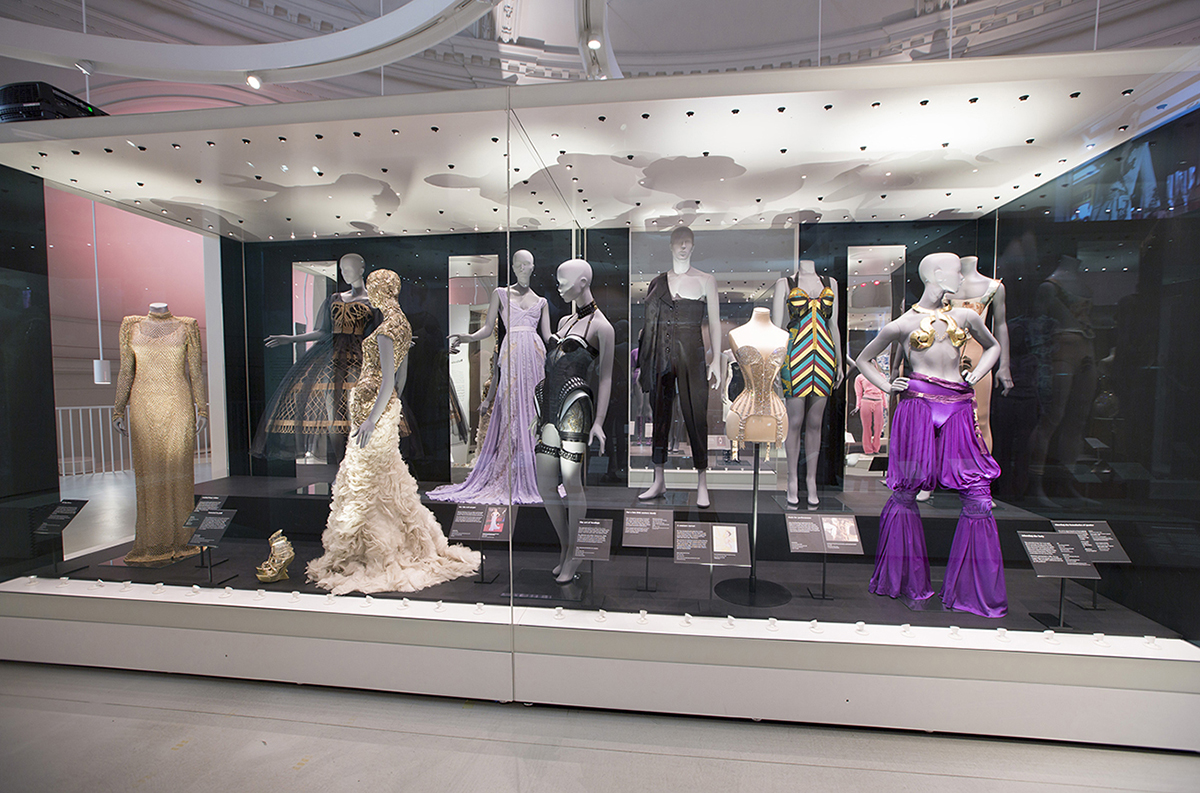 Overall, the costume section layout and this particular display cannot be compared to the V&A’s more recent fashion exhibitions. The space is well overdue for its own uplifting reshape from the inside out. You are led around a low ceilinged oval, which means all visitors (lots of!) are stuffed inside the concave walkway. Meaning, the largest exhibition of underwear to-date is in the convex glass cabinets with small descriptions to huddle around. This creates a hopeless feeling due to the physical challenge of getting to read them. Upstairs it gets roomy with too much air around the display cabinets adding to a sense that the exhibition is incomplete. Undertaking this vast and fascinating topic has emphasised the V&A’s need for their fashion and textile department to rethink this permanent space in order to cater for the large crowds they attract.

Upon leaving the exhibition one might think A brief history of underwear is not only a pun, it is also, well… rather Brief! – And a little too hard to make sense of given the juxtaposition of undergarments in an uncomfortable to navigate space. However, thank goodness and about time the garments worn closest to our flesh – boxers and brassieres – have been given the spotlight. They form our identities, hold secrets, cause controversy, empower, shape and define generations. May viewers continue to explore, question, redesign, be in awe of these fabric tools, and may the 2nd largest exhibition of underwear-to-date be even better.

Undressed: A Brief History of Underwear  is on display at V&A until 12 March 2017.