My mother had a button tin– an old sweet tin that was once given as a Christmas present. It had been full of butterscotch – my Grandma’s favourite – and that taste just explodes in my mouth…

On the tin were some indentations.  I had not really looked at them too closely before, but now, as an adult, looking, feeling, I realised that it was a footprint. A small, rounded, solid dent from a child’s shoe – possibly one of those Clarks’ specially measured shoes with straps that were impossible for small hands to do up.

I had obviously trodden on the lid of this tin at some point and left my mark.  I was probably told off too….

But it wasn’t the outside that was so fascinating, it was the inside – it always was, and now is more so. Full of buttons: odd ones, a few sets, some with cottons still attached, some very old, some horrid ones, some strange plastics, some leatherette, some fabric covered – from dressmaking ventures… I remembered a few, the garment impressed in my mind, the feel of the fabric immediate against my skin. The event, the colour, whether I loved it or hated it.  Some were vaguely familiar, and turned out to be my mother’s – again from her own making, a jacket or coat which I probably hung on to (and maybe I even pulled a button off, whilst fiddling – to be told off again). Some were very ugly for our taste now, but then were the bees knees and very desirable and thought to be fashionable – in the fifties, something we sort of wanted to be, but also not really.

Extract from The Smallest Button

I heard a note
A flick, a beat
Didn’t think
But later found
That the smallest button
On my old coat had gone.
Two large ones remain but
This one, most important and unique,
Had gone.
A discoloured frayed thread forlornly
Hanging.
The coat has survived many years
Many troubles, but always warms me;
Repaired and patched, buttons re-sewn
With non-matching cotton.
But now it is not complete.
I had allowed the thread to break
And now the coat is gaping.
Maybe the button will be found
And cherished again;
Maybe it will be cared for by another
Or fasten a coat again.

A section from Requiem for Buttons Lost

(a section of the Requiem mass is the Recordare:  this means’ remember’  but it is also ‘record’.   A noun and a verb:  a record / to record)

Extract from A Coram mother

I leave you this button
To remember me
I left you here
But do not forget you
They will care for you
As I cannot
One day they’ll give you
This token of me
This button carries my story
Tells you my tale
What befell me
And how I fell
But you are not to blame
You must now prosper
Coram will care
And one day will share
My story
My love for you
This button of mine
Will be given to you
Now we know
They never gave them
The stories not told
Still held in the button.
A button’s story un-folded.

(The Foundling Hospital, founded by Sir Thomas Coram in 1739, took in babies whose mothers could no longer care for them. These mothers often left a small token – a ribbon, a fragment of fabric, a coin, a button, to identify the child, and in the hope that in years to come they would be re-united – joined again. But the children were never given these tokens… they never knew their mother’s tales.)

Buttons in my teaching.

A pile of buttons – pick one. Draw it. Draw the garment it came from. Who wore it? Daily or special, when did they wear it? What is it made of, how is it fastened, where was it made and when was it born? How did it become lost…

Then I mention Coram and the Foundlings. Buttons as tokens, and the sad thread that leads us back to that time and links then and now, us and them. Eternal stories … We wear and we lose, we love and we lose, we button and unbutton all our lives. We all do this, so we all know this, and we all share this.

Whilst looking for something else I found a reference to the Foundling Museum: a review of an exhibition Threads of Feeling – scraps of eighteenth century fabric with the handwritten details of babies left by mothers for the Foundling Hospital to care for. It had the patronage of William Hogarth and George Frederic Handel then, and Tracey Emin, Grayson Perry and Quentin Blake now.  A domestic museum with small, full rooms and endless stories, of priceless collections of Handel, and portraits of those in society, the high and the low, but all threaded together with a narrative of Coram’s vision. It is that that I found most fascinating.  The one main room has the histories of the hospital and the people, the mothers and children, the teachers and benefactors. Little garments and uniforms, street scenes and London society.  Then press a button and you hear the reminiscences of more recent foundling children, now adults, but still attached to what this place did for them.  And outside, from some of the upstairs windows, you can see a children’s play area and hear laughter. And in Coram’s Fields a little way off, a notice, ‘no adult admitted without a child’ – not the usual law; so, on my own that day, I could not go in.  Next time, I will take my god son – then I can play in there, next to this beautiful place.

This Museum is about inspiration – of its founder, and of its staff today: a volunteer on the desk when I was there had come back to work here entranced by one object she had seen and now buttoned into the place.

And I hope that as I develop my ideas that I will be able to take my students and open them up to the stories and inspirations too. I sometimes feel in teaching today that our world has become cynical and quick, needing to be fed with instant information and images and fast fast fashion. But The Foundling Museum reminded me that it is still the small detail that fascinates, that engages, that hooks, and buttonholes us all.

So this is not a review – it is a sharing of the inspirations found and sparked.

And therefore the review rating for The Foundling Museum is top notch. Full of inspiration, which is the highest rating for a museum, I award it: the bag full of buttons – every one unique. Recommended to all, and with the guarantee that your experience will be different.

(This writing includes pieces from an Anthology and is to give some idea of the fragments that flow from an inspiration – poems, memories, short pieces and long, and all threaded through with my own passions and interests.  Fascinatingly, other connections emerge. A few years ago I wrote some texts stimulated by William Hogarth’s A Rake’s Progress, A Harlot’s Progress and Marriage a la Mode for the illustrator and printmaker Fernando Feijoo. His contemporary trilogy, based on Hogarth’s view of society, is just completed and is due to be brought together in a book this year.  The inspiration of Hogarth was at the heart of his and my work for that project. Then, last year I found the connection of Hogarth to the Foundling Museum – I had gone there after being fascinated by the Threads of Feeling exhibition and as my button obsession was emerging.  Twined together – threads that are tied and carry on, fraying, being re-tied, joining and loosening…..) 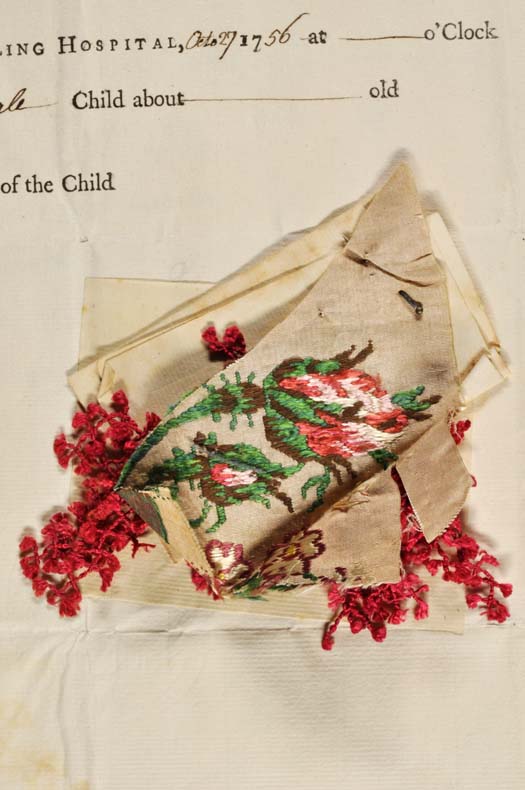 Threads of Feeling exhibition will be on display at the DeWitt Wallace Decorative Arts Museum in Colonial Williamsburg, USA From May 25, 2013 through May 26, 2014