In this first interview for ‘Fashion Unlearned’, Address contributor Emily McGuire speaks with Orsola de Castro about her views on the systemic problems within fashion. Since co-founding Fashion Revolution in 2013, Orsola and her team campaign globally for brand transparency as a way forward for sustainability. With wholehearted urgency, Orsola explains the flawed relationship between fashion and sustainability, and why we need to unlearn what we know about fashion in order to create a sustainable future.

Emily McGuire: What frustrates you the most about the current state of the fashion industry?

Orsola de Castro: Each day, I develop a new frustration. The Chanel show in Cuba I just found so profoundly indecent. Chanel has a complete lack of transparency or moral sense.  I thought it was decadent and pretty but it really felt wrong – pushing these aspirations somewhere where people can’t afford it. It’s wrong for the environment flying all those people into Cuba. We don’t know who made those clothes, and then they’re shown to people who will never be able to buy them.  What annoys me about the fashion industry, is such clear acts of defiance.  There is a need for change.  There is a want for change. Not just in relation to fashion, but in relation to all industries. Big players like Chanel are peacocking their own vanity with this fake illusion that fashion beats all because of its glamour.  As if we can somehow paint it all in an image of gloss and sparkle and that will take away the substance of the people who make these clothes, the environment in which they work, and the consumer who buy them.  That was my frustration today.

There’s an act of defiance from H&M, too. Here’s a company that is on one level really positive about transparency and yet on another level, is completely lying. H&M is using the oxymoron of sustainable fashion to their advantage; they’re using this moment of confusion and insecurity on behalf of consumers who don’t really know what to do. It upsets me that the fashion industry can’t lead on these issues. It upsets that such a visual industry is not using its power to change. It upsets me that such a fundamentally female craft has turned into a fundamentally male business. It upsets me that we don’t value the hands that make our clothes, that we’ve turned them into a non-necessity inside fashion’s value chain. 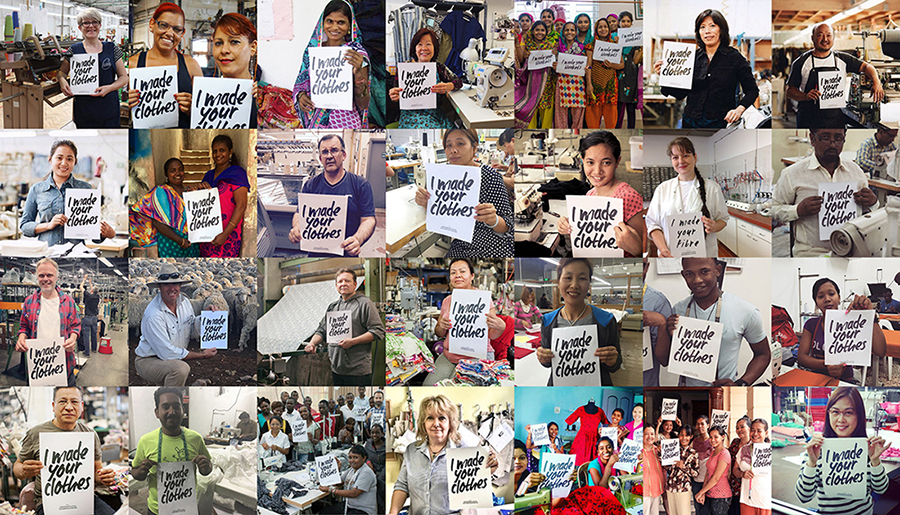 Clothing manufacturers respond to consumers by saying, “I made your clothes” to promote brand transparency. Source: Fashion Revolution

It’s almost a cliché now, the oxymoron of ‘sustainable fashion’. I’ve read that you’re not keen on this term…

First of all, I feel the terms ‘sustainable fashion’ and ‘ethical fashion’ are bad names for a good business. I would much rather call ‘us’ fashion and ‘them’ not sustainable fashion.  Fashion is about the craft, it’s about the making, it’s about the clothes, and it’s about the fabrics. For me, all these things speak about respect – respect for people and for the planet. If anyone should have a shit name, it should be the people who aren’t professing that respect. I utterly refuse to call myself a sustainable or ethical designer, or anyone else who works in this profession by those terms.  I would also like to afford them the decency of having a name that actually describes their craft. If I am talking about a designer who up-cycles I’ll refer to them as an up-cycling designer, and so on. It’s too wide a term, sustainable fashion; it puts us all in the same category. There’s luxury, apparel, yoga gear, swimwear, eveningwear, bridal, childrenswear all in this same bracket. That’s what it is – fashion.  If anyone really wants to point the finger, point it at those doing wrong and not those who are actually manifesting what fashion is all about. 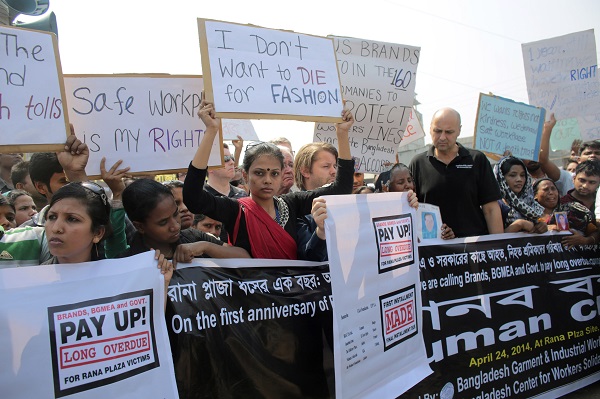 Garment workers in Bangladesh protest for fair wages and safer conditions on the one-year anniversary of the Rana Plaza factory collapse, which killed 1,134 people. Source: Andrew Biraj for Reuters

Fast fashion brands are often heralded as contributors to the democratisation of fashion because they provide affordable clothing to the mass-market.  What’s problematic about this for sustainability, considering the fashion system is actually a hierarchy deeply rooted in the desires and motives of global capitalism?

We can’t call something democratic if we’re only describing a product. Using the term democratic to describe luxury is again the wrong term because democratic fashion should be democratic for the people who buy it and for the people who make it.  A product of quality should describe the quality of the product but also the lives of the people who made it. Those terms are just a glossy description but not an accurate one for how things are. There’s no way we can call fast fashion democratic when we know, for a fact, that to make it democratic we would need to raise the price of T-shirts by 30 pence.  This is what we know would happen if brands paid their garment workers a living wage. The description of fast fashion as democratic originates in the 1980s, which is when fast fashion actually started appearing on the market. So, it’s an out-of-date description and I think plenty of campaigners have eloquently explained why it should not be used to describe fast fashion or its products.

Personally, I don’t feel there’s anything luxurious about luxury fashion either.  When you buy a Gucci bag, that’s not a luxury product, it’s a mass-produced product sold under the guise of something else. At the moment, the fashion industry is selling a dream. This dream does not reflect the reality of the entire supply chain. I think it should reflect this reality, and we need an industry that should be able to use those words to describe its processes from seed to product. 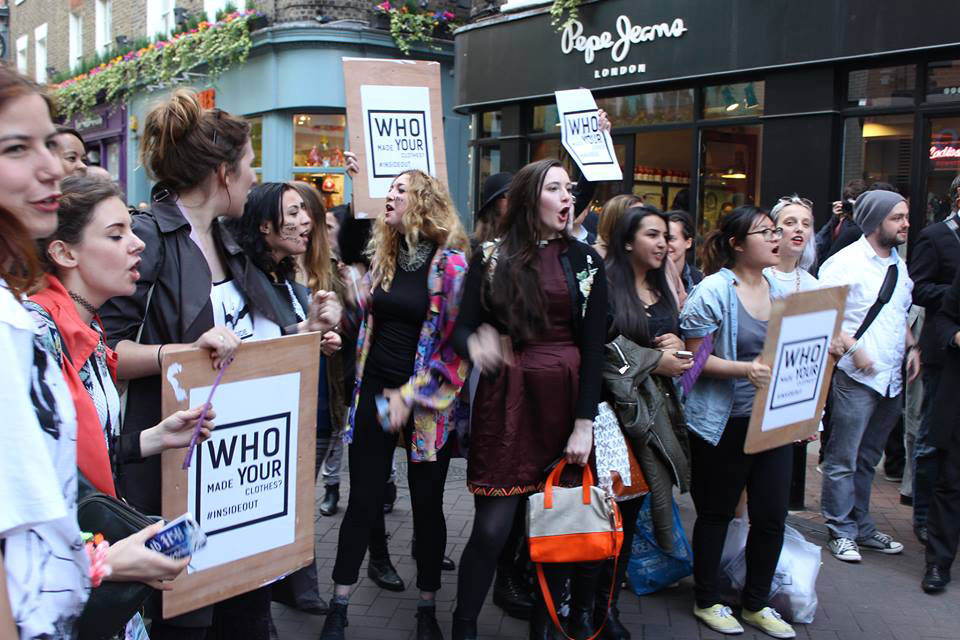 Students from the London College of Fashion protesting on Fashion Revolution Day by asking, “Who made my clothes?” near Oxford Street, London (2014). Source: Katie Beggs

This is very concerning because the notion that fashion democratises style is in the seminal texts that students are given at universities. As you say, it’s a very big problem that runs deep in our industry. It’s almost like an unlearning has to happen with that term because it’s not reflecting the reality of the industry at all.

Unlearning is actually a very good word as it’s precisely what we need to do. We need to unlearn in order to re-learn. We’ve been given a very non-accurate picture of the fashion industry.  I teach primarily in fashion schools and I never use the term sustainable fashion. I tell them, “I’m going to talk to you about the fashion industry”.  Once I tell them what the fashion industry is like, right now, then they can make their own minds up if they want to join that industry or not; if they’re interested in working under those conditions or not.  Products are no longer designed; instead, they are marketed. It’s no longer the designer’s job to design, it’s the marketer’s job to go to the design team and say, “in Beijing they want big leather bags, and in the United Arab Emirates they need to be pink with studs”. That’s what is informing design now, sales. When we start teaching students that they need to unlearn in order to re-learn the realities of this industry, then we can start a-fresh and make new assumptions as to what kind of world they will be inhabiting when they finish university.

Orsola co-founded Fashion Revolution in 2013 after the collapse of the Rana Plaza garment factory, which killed 1,134 workers.  Fashion Revolution is a worldwide event that happens annually, which prompts consumers to ask fashion brands, “Who made my clothes?” Through provoking supply chain transparency, Fashion Revolution aims to change how we produce and engage with clothing for the benefit of consumers, makers and industry players alike. Orsola mentioned that the next phase for Fashion Revolution is to focus on influencing policy makers.