The relationship between fashion and architecture is in constant dialogue as both disciplines echo each other’s design vocabulary. Nowhere is this more present that at the biannual catwalk shows, where clothing is made to fit the space, or more often, vice versa. Jacob Rosengren considers three case studies from recent spring summer 2015 shows where fashion entered into conversation with the space in which it was presented. 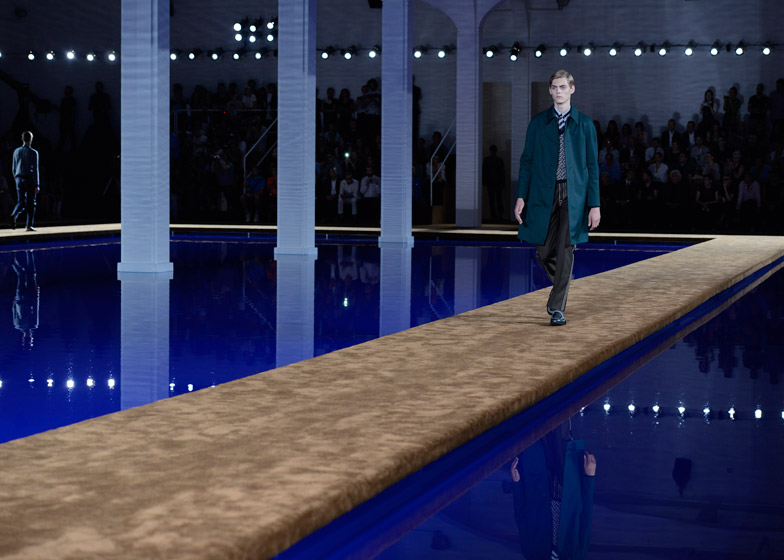 Showing seasonal collections is no more about sending out a selection of clothing down a blank, usually white, canvas of a catwalk. Brands with the financial capital can ensure that the clothing and the space is which they are presented, are in harmony with each other. Whether a carefully selected location that enhances the experience like with Loewe, a building owned by the brand such as the Fondazione Prada that can act as a playground for experimental ideas or custom commissioned and built tent in the way they do at Dior, it is all about the location when it comes to ensuring that the messages brands send out for the season are cohesive and considered from a 360 degree perspective.

London based fashion designer J W Anderson cultivates a design style that blends statemental shapes, Zen-like silence and the confidence of mid-century modernism. To echo his approach, it is no surprise then, that he chose the UNESCO World Heritage Center in Paris as the setting for his debut catwalk collection for Loewe. 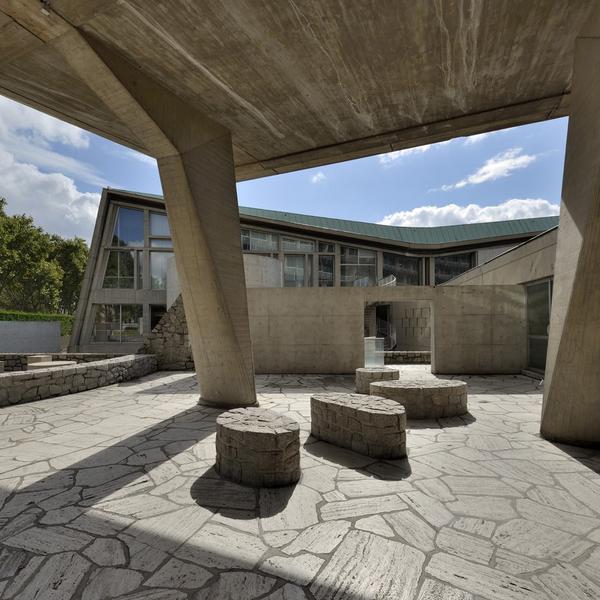 Housed in this iconic structure in Place de Fontenoy, UNESCO as an organization itself goes some way in acting as a metaphor for Anderson’s efforts in maintaining the legacy of the Spanish luxury house with a history going back to 1846. As part of this, he has restyled the branding with the help of M/M Paris, reissued classics such as the Amazona bag and brought back the brand’s reference points to Spain. But whilst maintaining the legacy is Anderson’s top priority, when it comes to design, his approach is less about preserving the old, as he is pushing the aesthetics associated with the brand to an uncharted and exciting territory, closely reminiscent to the style of his London-based namesake label. 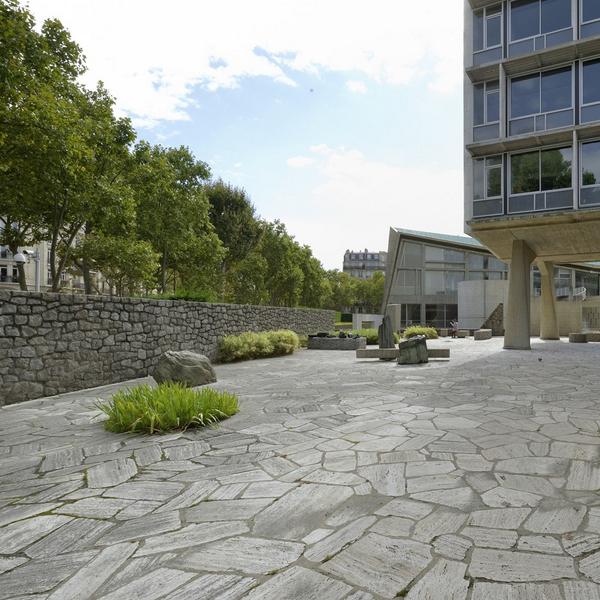 For his first show, Anderson certainly sent out a clear statement about his intentions in wanting to elevate this otherwise forgotten brand, hence the choice of venue reverberates even more. The UNESCO building, designed by three of the most significant architects of the 21th century Marcel Breuer, Pier Luigi Nervi and Bernard Zehrfuss[ref]These architects were selected by a committee consisting of Lucio Costa, Walter Gropius, Charles Le Corbusier, Sven Markeliu, Ernesto Rogers and Eero Saarinen.[/ref], is a challenging backdrop to for a collection. Yet, Anderson’s design ideas entered into a dialogue with the building as the models entered the path set out for them in the Japanese Garden on the grounds of UNESCO[ref]Designed by pioneering Japanese American sculptor and landscape architect Isamu Noguchi[/ref].

The rawness of the materials used in the collection mimicked the rawness of the materials used on the site. Leather and suede, the trademarks for Loewe, are used in a similar way to stone in the Japanese Garden: both appear untreated and accidental but are anything but. The garden set incorporates references from Japanese heritage blended with predominantly European Mid-century aesthetics creating an unexpected mix – also seen in Anderson’s work. These reference points resonate particularly in detailing whilst imperfections, or wabi-sabi, enhance the overall dialogue created in cloth. Geometry and asymmetry continually converse in both the clothing and the garden but come together in harmony. 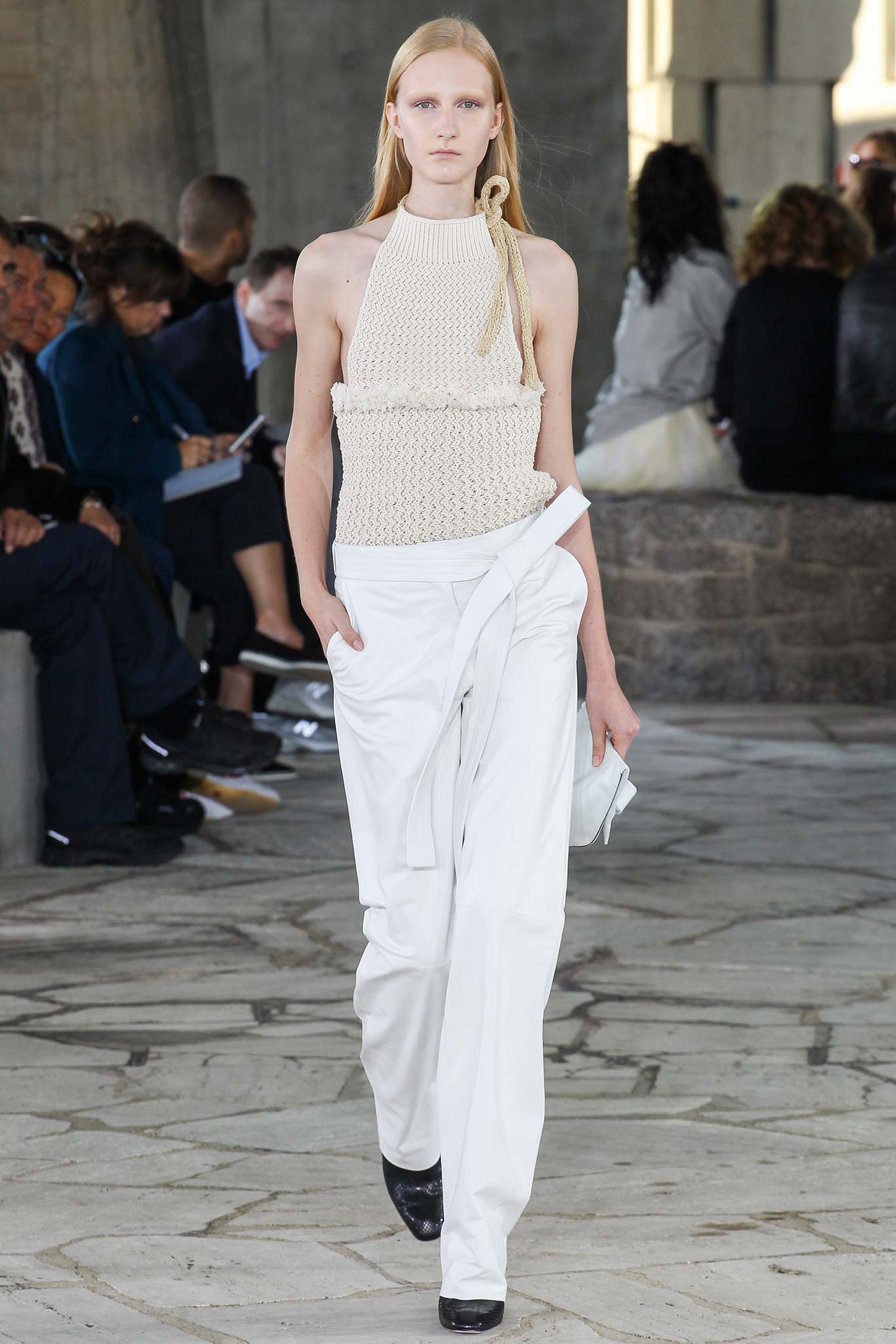 As with many luxury brands with roots in leather goods, the challenging clothing in the spring summer 2015 show, presented against this architectural garden setting, only act as the backdrop for the bags. Purses, pouches, shoppers and totes literally carry the Loewe legacy and the future of the brand is measured is the sales of these minute design manifestations. Yet, the clothing is not secondary. They add to the dialogues of design, enhancing the way fashion is understood now and next. 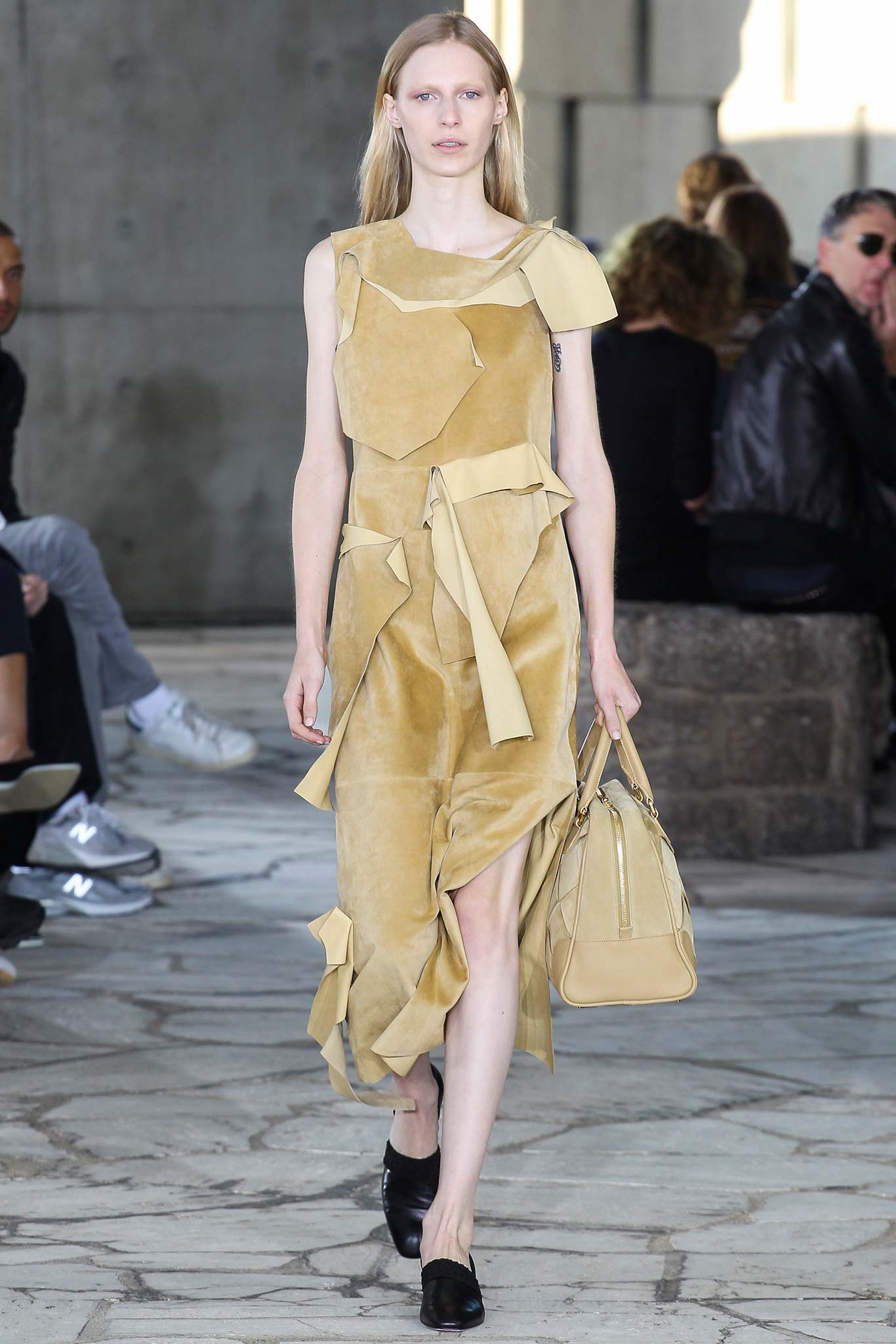 The connection between men’s and womenswear at Prada, is best-described echoey as both reflect each other whilst subtly altering in tone as time goes by. The design directions witnessed at the men’s shows in July and January are always resonated at the women’s shows in following September and February. And as well as the clothing, the opposing show sets enter into bouncing dialogue, reflecting both Miuccia Prada’s design aesthetics for the collection and each other as spatial experiment in their own right. 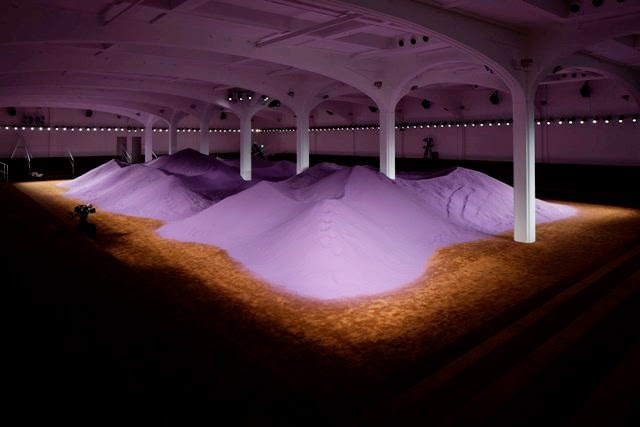 The Prada show spaces are the responsibility of AMO, the research driven counterpart of OMA[ref]Architectural practice founded by Dutch architect Rem Koolhas[/ref], that operates in areas beyond the traditional boundaries of architecture, including media, politics, sociology, technology, fashion, curating, publishing, and graphic design[ref]The partnership between the brand and practice is longstanding with collaborations covering store design and pop up spaces and the biannual show sets[/ref]. The results of this collaboration, are usually conceptual propositions, breaking the traditional notions of arrangement, look, perspective and purpose of a catwalk. 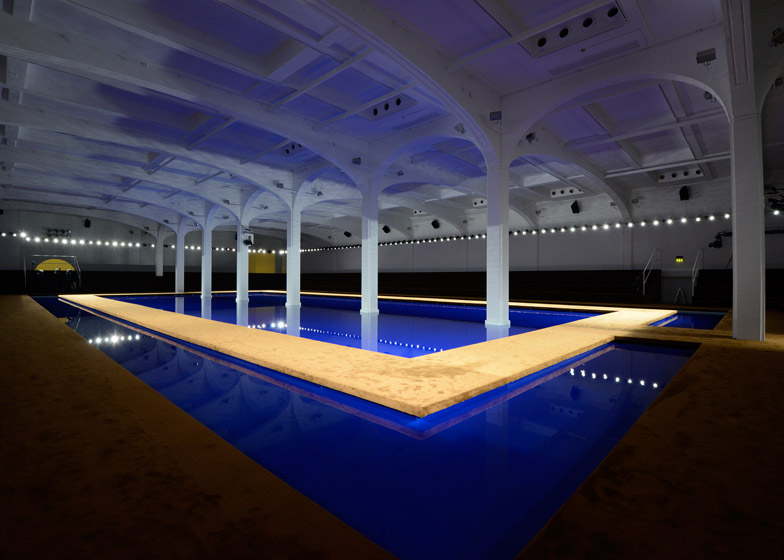 For spring/summer 2015 season both the men’s and women’s show sets explored natural elements and their relationship to indoors. Staged in the Fondazione Prada and drawing from the same design principles, both sets were rectangularly staged with natural elements that appeared unnatural dominating the centre of the arrangement. At the menswear show, the dark sand coloured carpet catwalk seemed elevated against the unusually piercing cobalt blue pool – but the set was controlled and flat. The women’s show set in turn was more organic and irregular, even chaotic, as the same grounding carpet appeared as if subtly overtaken by the lilac sand dunes that piled over the centre of the set. 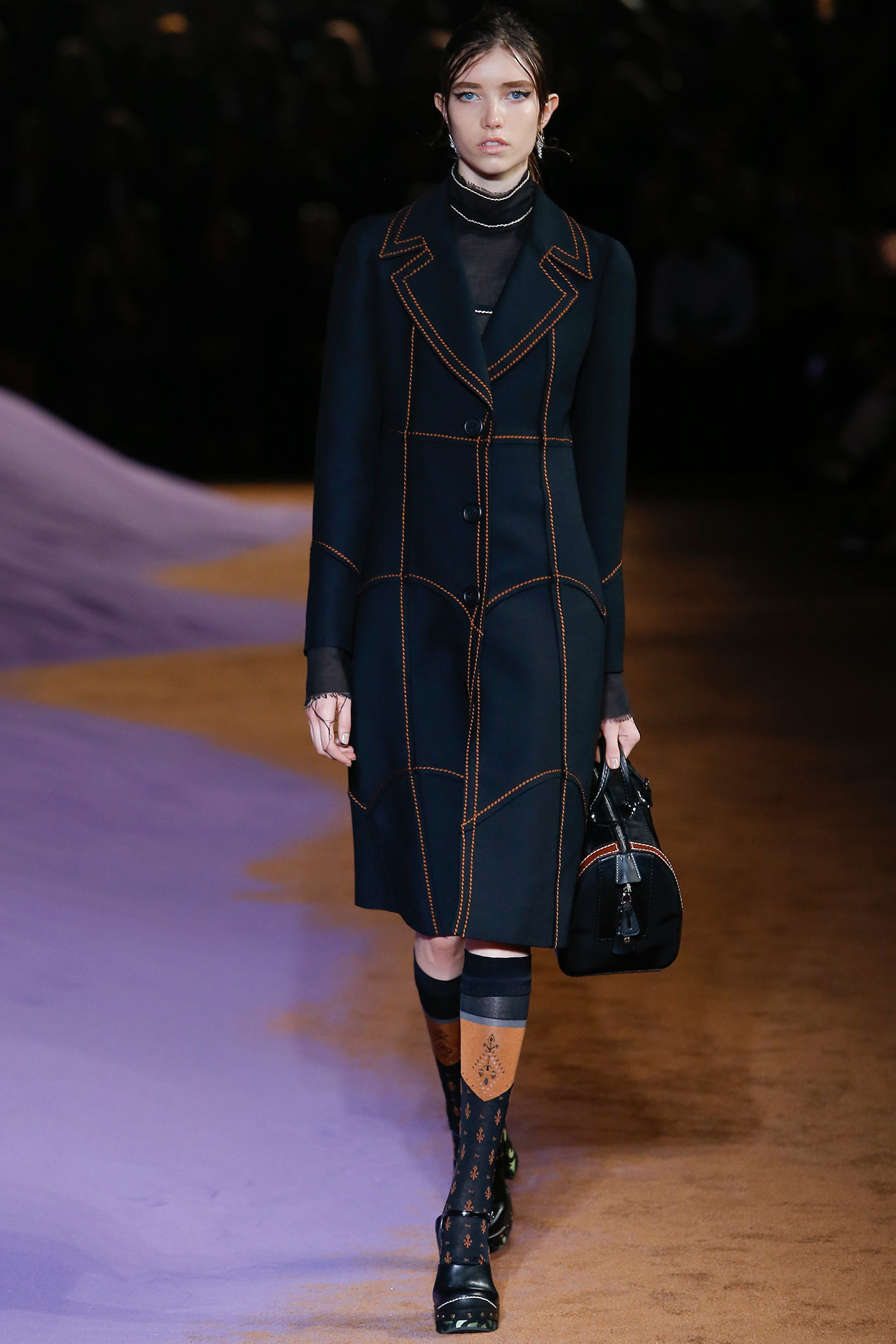 The clothing echoed the relationship between the spaces both physically and metaphorically. The interplay of control and chaos was mirrored in the clothing through the use of statemental topstitching contrasted with unraveling hems. This was also reflected in the silhouette referencing Victorian prudery and 1950’s primness with an underlying subversive tension. Fabrics bounced between heavily pattered prints and jacquards to sharply contrast the clarity of leather, suede and wool whilst the colour world of the set was picked up in some of collection details – little brown in the stitching, lilac in the trimmings. 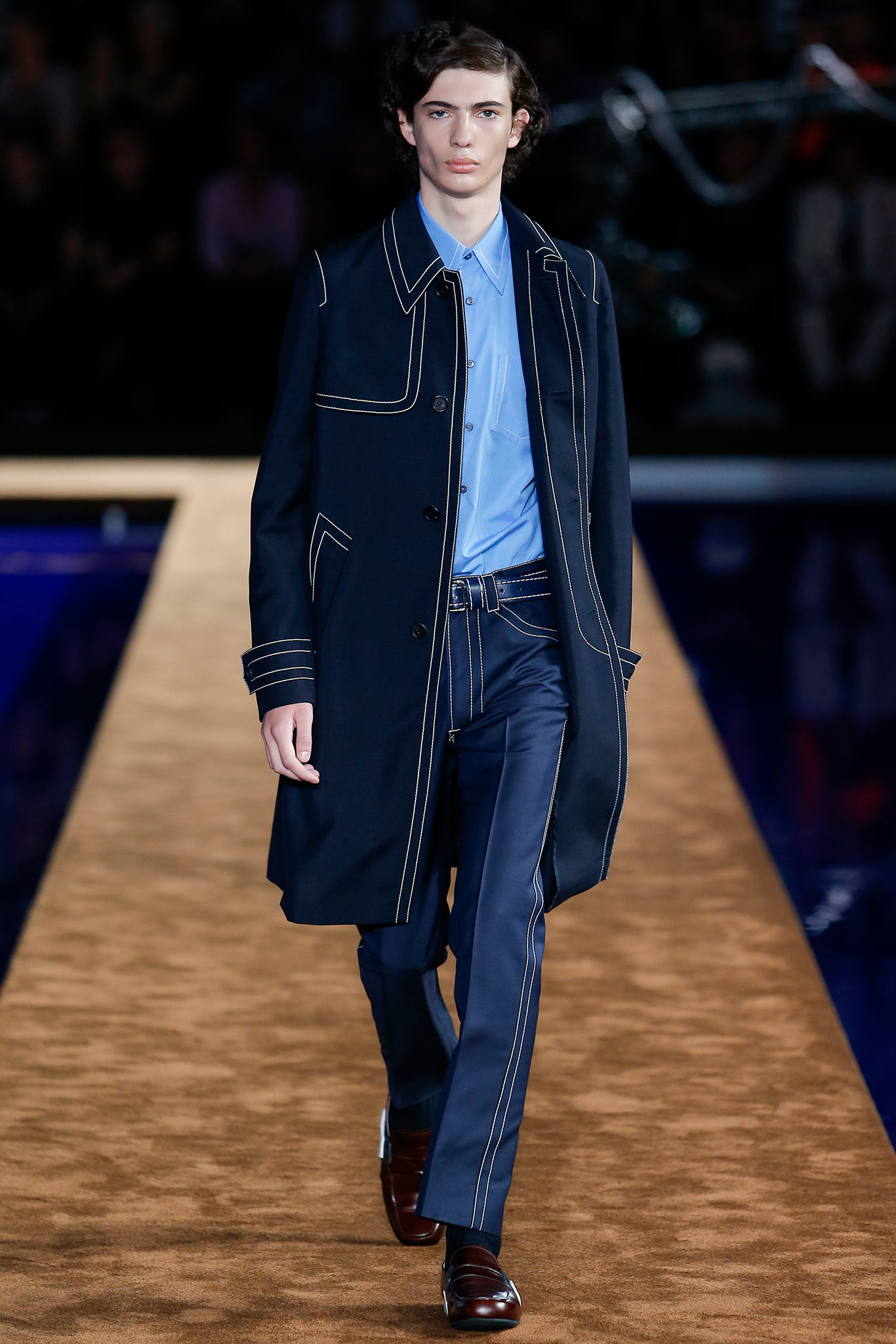 The Christian Dior spring summer 2015 show space, designed by the production company Bureau Betak, explores oppositions much in the same way as Raf Simons does with his fashion collections for the house. This time, the dialogue was set between reimagined past and retro future. 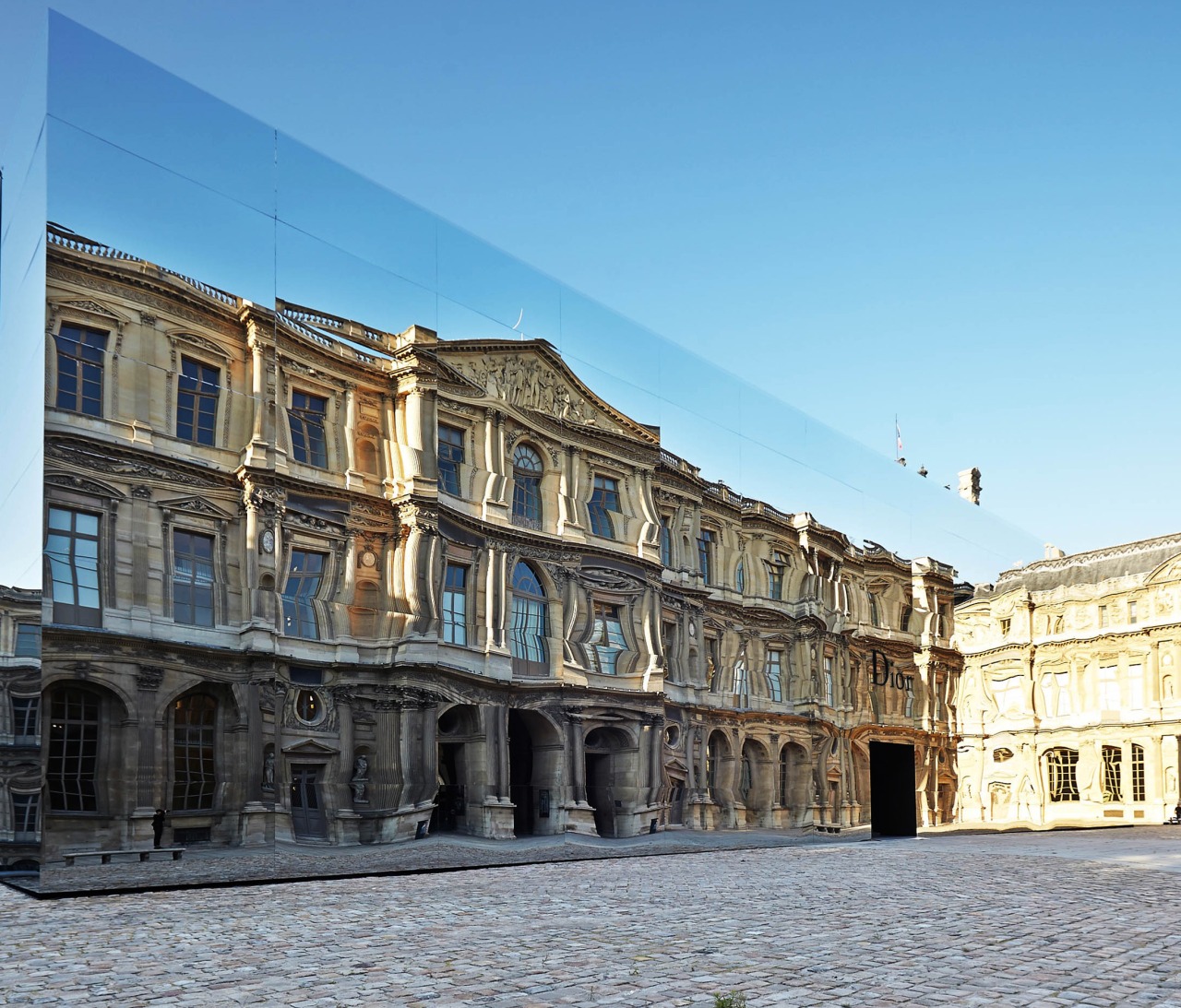 The show space took form as a custom built structure in the Cour Carrée courtyard of the Louvre. The mirrored outer shell painted a reflection of the surrounding ancient palace, once home to the kings and queens of France. The resulting surface gently morphs into a disfigured architectural tableau. The scene inside the show space however, was in stark contrast to the glossy cover. The floor plan, that builds on the style used for the autumn winter 2014 couture show, subtly mimics the octagonal corridor featured in Stanley Kubrick’s 1968 science fiction film 2001: Space Odyssey, with its immersive optical appearance and graphic mixture of black and white [ref] 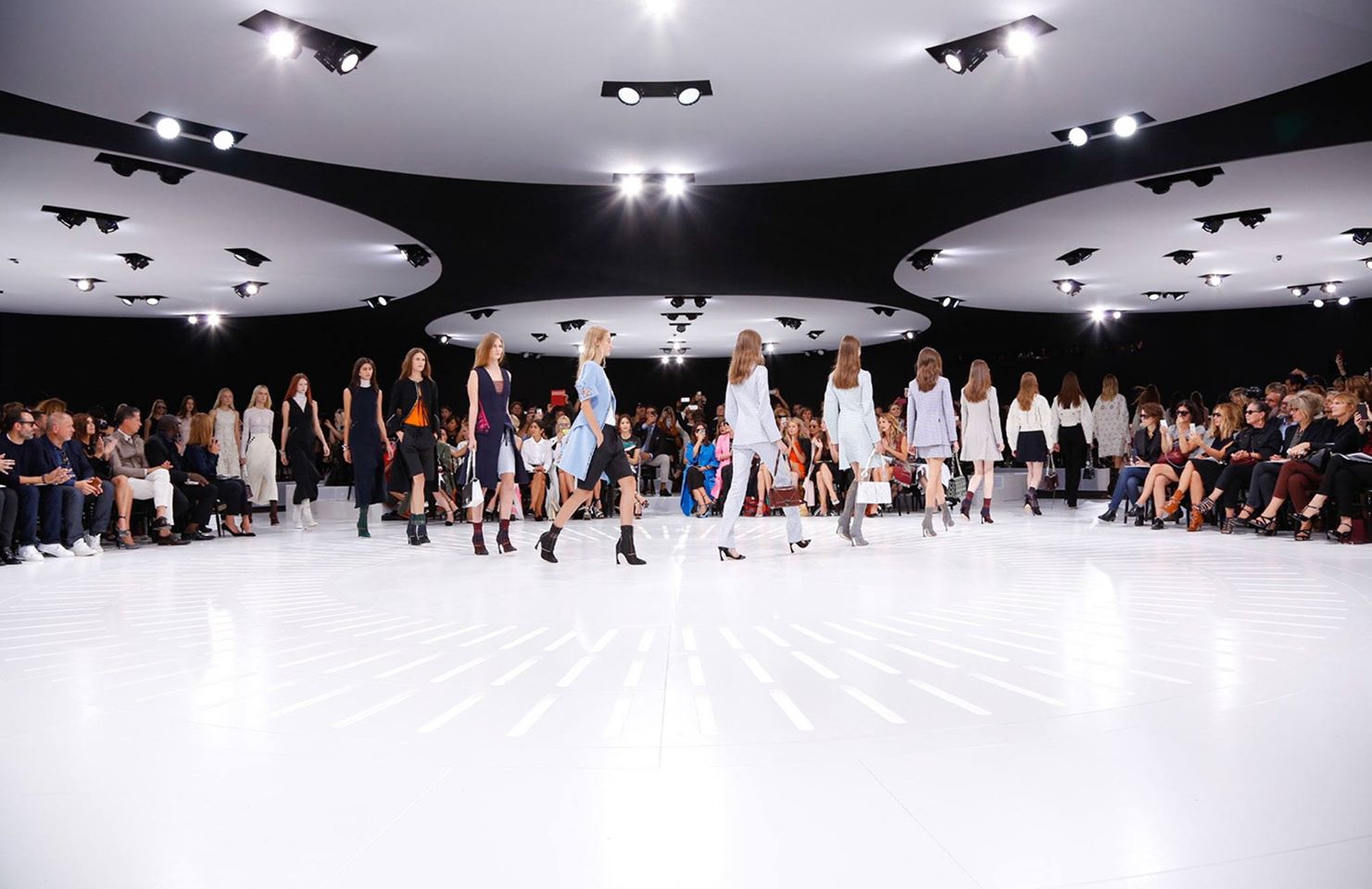 Both the inside and the outside act as a reflection on the collection too, as clues from Kubrick’s film and 18th century court fashions translate into clothing details and silhouettes. Boilersuits, detailing from space suits and a generous use of stark white, all suggest a nod to Space Odyssey. Crinoline shapes, regal embroidery, delicate floral patterns, nostalgic pastels and corseted cuts, all borrow references from Marie Antoinette’s wardrobe. Together these opposing elements are applied to silhouettes with traditional Dior trademarks – A-line cuts, fitted tailoring and hemlines just on or below the knees. 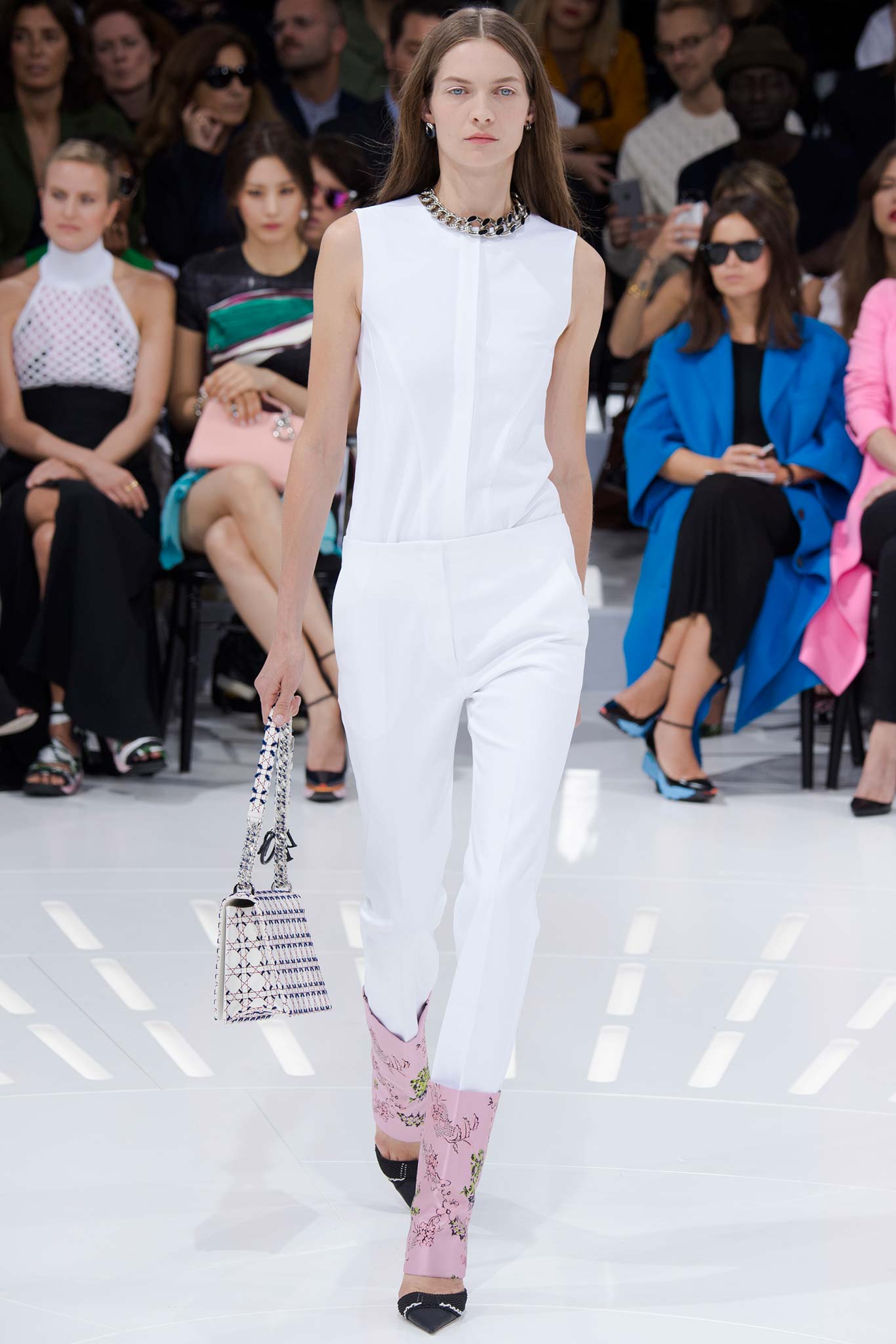 The famous hotel room sequence from the Space Odyssey, where the protagonist Dave Bowman is studied by the invisible alien entities, sums up the overall approach as literal historic elements collide with something that is futuristic, even unfamiliar[ref]

2001: A Space Odyssey (1968) by Stanley Kubrick[/ref]. Simons understands this approach well as a reflection on the way we occupy our environments and consume design. The relationship between past and present is in constant dialogue, building up resonating layers in the evolution of our wardrobes and surroundings: it is never the case of carte blanche. Fashion, and indeed design, is not about blatant newness: it is about innovation that is rooted in traditions, codes and well-established elements of the past, in order for it to evolve in minute increments: never in leaps. 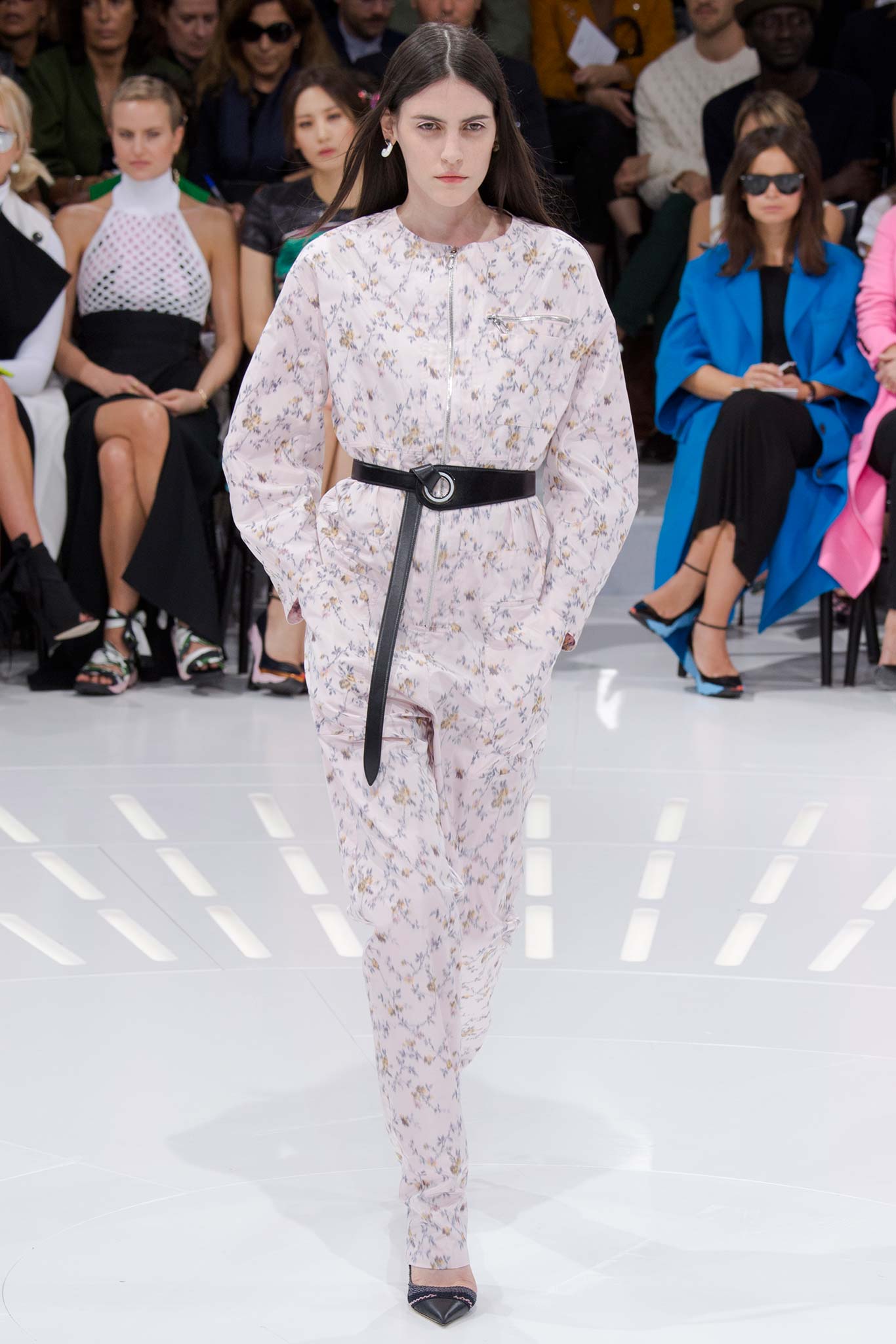