Last week, the film folk gathered to celebrate the 85th Academy Award ceremonies at the Dolby Theater in Hollywood. We, the fashion folk, are always eager to see who is wearing what and, more importantly, which brand on the red carpet. This year, Valentino eagerly spread the word that Anne Hathaway was going to be wearing a dress by the brand but in the end, the actress appeared in powder pink Prada. Jennifer Lawrence, in turn, stumbled up to accept the award for Best Actress in (also) powder pink Christian Dior s/s 2013 couture gown, look 43.[ref] 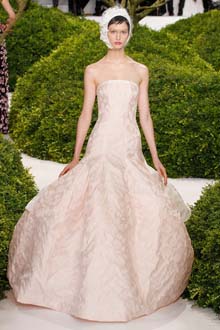 Source: Style.com[/ref] Analysis of the dress choices, mapping key colour and dress trends, and of course the best and worst dressed lists, fuel the following weeks’ discussions online and in print. Events like this bring a lot of publicity to the fashion houses and a great deal of money is invested on PR. The importance of red carpet and gala events like the Oscars is also reflected on the catwalks where eveningwear is showcased as the prominent part of collection finales by the likes of Gucci, Versace, Chanel and Valentino. And this also helps to keep the allure and glamour of the fashion industry high.

This year, the Academy Awards red carpet dress choices seemed relatively safe. But then again, I wasn’t expecting anything spectacular. Evening gown after evening gown, in predominantly light and pastel shades with the occasional black, silver or gold gowns contrast with the red carpet. Body fitting, arms showing, diamonds draped around wrists and necks: the recipe for the red carpet is tried and tested. It’s as easy as boiling potatoes but unfortunately, the result tastes equally as bland.

There are various benchmarks I use to evaluate design. Time relevance, contemporary aesthetics and seamless function are just a few of the elements that constitute my search for good design. Problem solving is also a definition that helps to sieve the great from the not so great and in general design terms, it is one of the driving forces of outstanding design thinking. But when it comes to fashion, problem solving as a definition, becomes, well, a problem in itself.

The blueprint for garments – shirts, skirts, shorts and so on, have been perfected over a number of centuries. In their simplest form, garments function perfectly due to clever pattern cutting, look and feel good due to advances in the textile development and are relevant due to clever design – just a simple white T-shirt is a testament to this. There aren’t that many problems that really need to be resolved when it comes to fashion. It seems the biggest problems fashion has, are based around next season’s It colours, sizes of handbags, length of skirt and height of heel. But if I had to choose a garment that most needs re-thinking, then it would definitely be the evening gown. In most cases they don’t seem particularly relevant, aesthetically pleasing or fulfilling a very meaningful function beyond the big PR machine that operates around premieres, award ceremonies and other media circuses. Evening gowns seem like a dated-princess-syndrome that some designers and clients are eager to hold on to even as new royal icons are showing the way, if not to dress fashion forward, but fashion appropriate.

One of the fashion houses best known for their evening gowns is Christian Dior. Looking back at the history of Dior, there have been various stages in the way evening gowns have been interpreted as part of the house vocabulary. Christian Dior himself perfected this garment style during the 11 years of his time as head of the house he founded and his legacy is still hanging over the head of fashion, shaping it over 60 years later. Each head designer at Dior since then, has interpreted the signature evening gown styles in various ways, trying to keep it relevant for time and fashion, with varying success. Marc Bolan kept the gowns classic but not so newsworthy, John Galliano made the gowns newsworthy with his theatrical style but wearability and fashion relevance became an issue.

The current head designer Raf Simons is making giant leaps in evolving the style even after only a year at the house. I would even go as far as suggesting that Simons is making evening gowns look modern, a statement that seems contradictory: the words modern and evening gown don’t seem to go together much in a way that fashion and problem solving don’t go either, never mind couture and problem solving. Look 10 of the Christian Dior s/s 2013 couture show was just part of Raf Simons’ design evolution in re-imagining the evening gown, and I’m using this term loosely, as you can see from the image below: the model is wearing trousers. Simons started to tackle this problematic garment style during his time at Jil Sander and looking back you can see his proposition for something reminiscent of an evening gown.[ref] 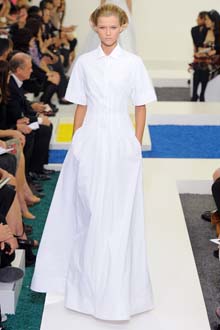 Source: Style.com[/ref] For his début Christian Dior couture show for a/w 2012 Simons drastically deconstructed the evening gown legacy of the house’s founding father. In looks 6 and 7, it appears as if he has cut off the bottom part of a classic couture gown, with only the bodice part remaining as the nod towards the heritage. [ref] 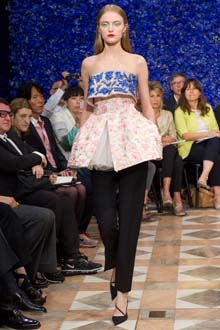 Source: Style.com[/ref] Styled with slim black cigarette pants, these looks married together the old and the new in a way that does not suggest reinterpretation, but a revised vision for the house.

He continued to evolve this look for his s/s 2013 couture show in a similar method. Like the a/w show counterparts, Look 10 consists of black, sharply cut cigarette pants and white gown top consisting of 2 parts: a corseted bodice with an overlay of loose, cropped waistcoat both intricately embroidered with strawberry and clementine coloured delicate floral applique with black leaves tying the colours together with the pant. The look suggests versatility and thus modernity, as the outfit is broken into two distinctive parts whilst holding on to ideas of classic couture and femininity, traits which seem much valued by customers today.[ref]Simons used this clever binary technique in other parts of the collection as well. In Look 2, he reversed the roles of the top and bottom half of the garment by matching a lively iridescent full skirt with a sombre black corset bodice.[/ref] As the codes of dressing have drastically changed over the last 60 or so years since Christian Dior himself proposed his new look, Simons is clearly considering the customer of tomorrow with his suggestions. And whilst it doesn’t perhaps tick the box of an evening gown, it certainly looks like a better option for the purpose.

In the grand scale of things, couture is hardly going to resolve any problems. It does however, employ a massive industry of skilled craft workers and can act as a laboratory for new ideas. Yes, beyond the private couture clients, it feeds into the big machine of the fashion industry and its promotion. In context of this, Raf Simons has come up with some relevant solutions to a dated garment style – a new look perhaps. And whilst the Oscar crowd seems to stay away from these looks, preferring to conform to more traditional ideas of dress, outfits like look 10 are vital in the evolution of fashion, regardless of whether we can label them in traditional terms or not. 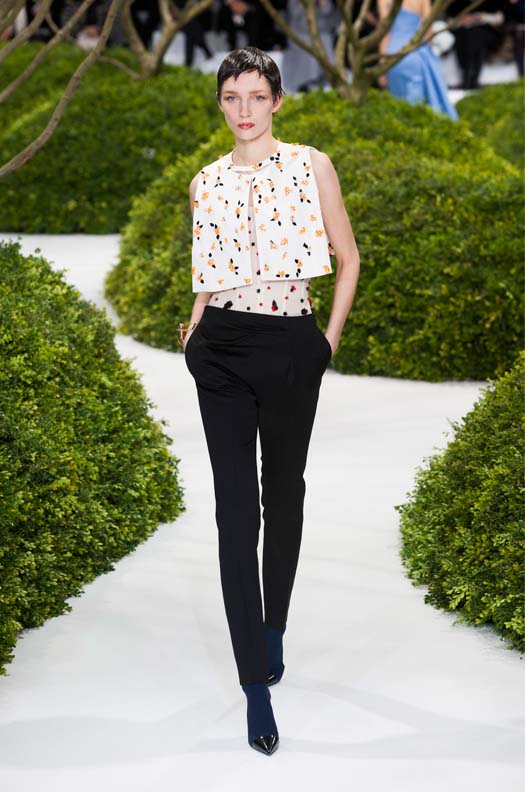