As part of our ongoing series of essays studying the intersection where colour and fashion meet, Address editor Johannes Reponen considers the significance of black in the work of Cristóbal Balenciaga, following a visit to Balenciaga, L’oeuvre au noir exhibition, currently on display at Musée Bourdelle.

In the way that most fashion brands have established style idioms as part of their visual vocabulary, no other house has historically been quite so heavily invested in black as Balenciaga. Yet, unlike the light aqua known as Tiffany blue or the blazing orange of Hermes, black at Balenciaga is not a branding gimmick. Instead, it is the signature shade that enabled Cristóbal Balenciaga (1895-1972) to concentrate on molding his sculptural vision for womenswear that became the core pillar of his design ethos, synonymous with creative integrity rather than marketing with its many manifestations that often dilute, as opposed to reinforce, the message. In fact, so important was the mostly colourless colour that an exhibition, entirely dedicated to highlighting the relationship between the couturier and his use of the dark matter, is currently on display in Paris.

Balenciaga’s affinity with black was layered. Stemming from his Spanish childhood, the colour for him is steeped in references to matadors, folklore, piety, austerity and beyond. The pronounced contrast of light and dark is created when black comes in contact with the blazing sun, particularly piercing in Spain, and was central to the visual effect of his clothes, much in the way that it enabled his countryman, painter Diego Velázquez, to articulate depth in two-dimension. Each of Balenciaga’s collections included a black dress that he had made entirely himself. Many of these are on display at Musée Bourdelle where the exhibition is staged, against sculptures by Antoine Bourdelle (1861–1929). 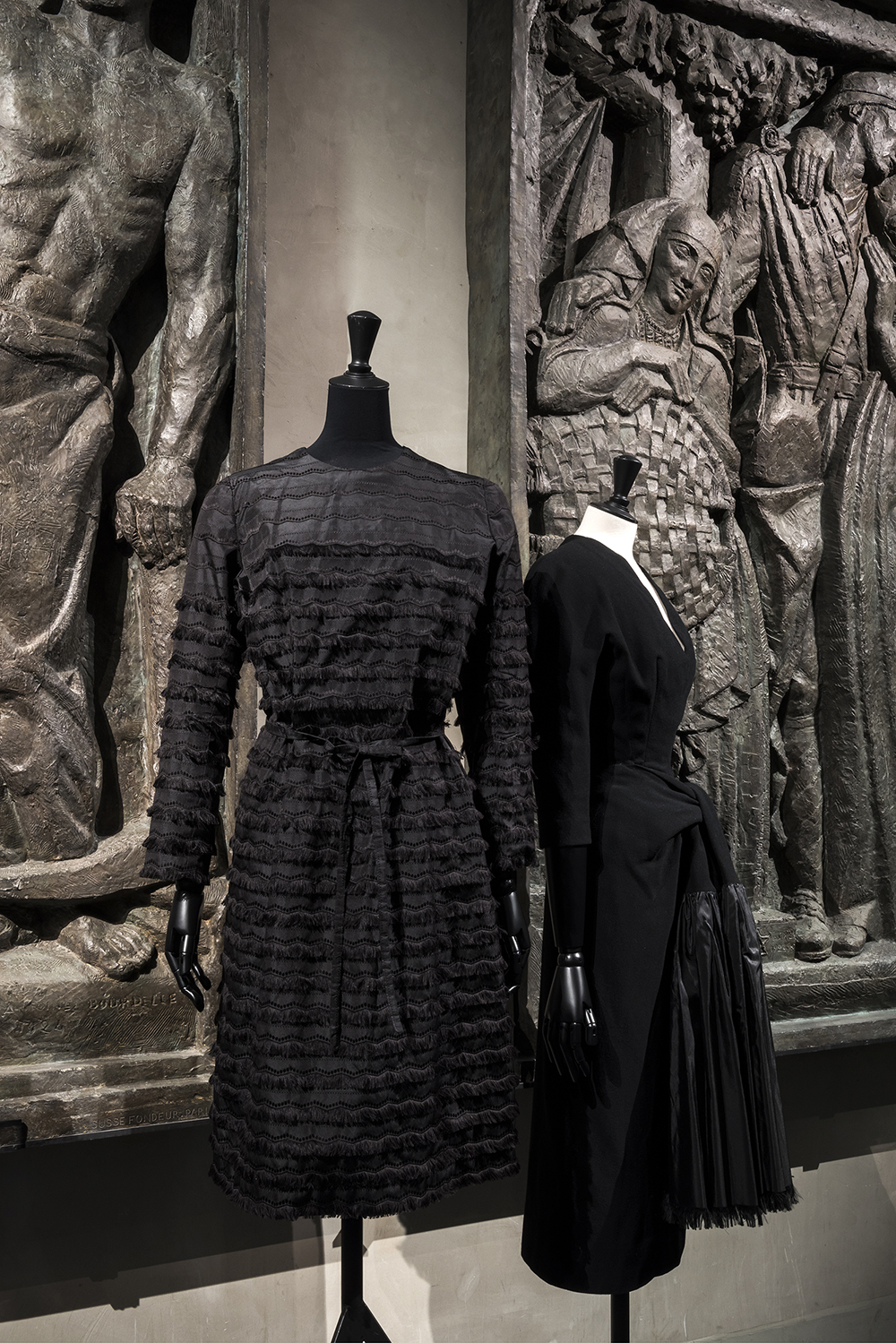 Balenciaga, L’oeuvre au noir (Balenciaga, working in black) as the exhibition is titled, is not a retrospective, nor a showcase in dress history. Rather, it is an investigation of the way in which qualities of black transform when in contact with fashion and vice versa. The exhibition is arranged across the different buildings that make up the atmospheric Musée Bourdelle that originally housed Bourdelle’s artist studios. The Great Hall sets the dialogue between couture and sculpture through the exploration of the foundations of both disciplines using canvases and patterns whilst Bourdelle’s studios, the only original part of the museum, provide an intimate setting to focus on millinery. It is at the contemporary Portzamparc wing where the exhibition becomes concentrated.

“In Balenciaga black is so black that it hits you like a blow. Thick Spanish black, almost velvety, a night without stars, which makes the ordinary black seem almost grey.” Harper’s Bazaar, August 1938

Although black in the hands of Balenciaga achieved new depths, it was never monotonous. Unlike Vantablack, the blackest artificial substance known, the Balenciaga-black doesn’t suck you into a dark hole where all definition is lost. Instead, his use of black is colourful, consisting of multiple different tones, shades and textures. Fabrics that reflect, sieve or suck light extend the spectrum. And, in the dominance of this one colour, the most minute additions of other pigments become amplified. Subtle blush pink ribbons and trim add a touch of frivolity, whilst contrasting creamy white, that is pronounced but not shouty, is used as a tool to frame on hems and collars. 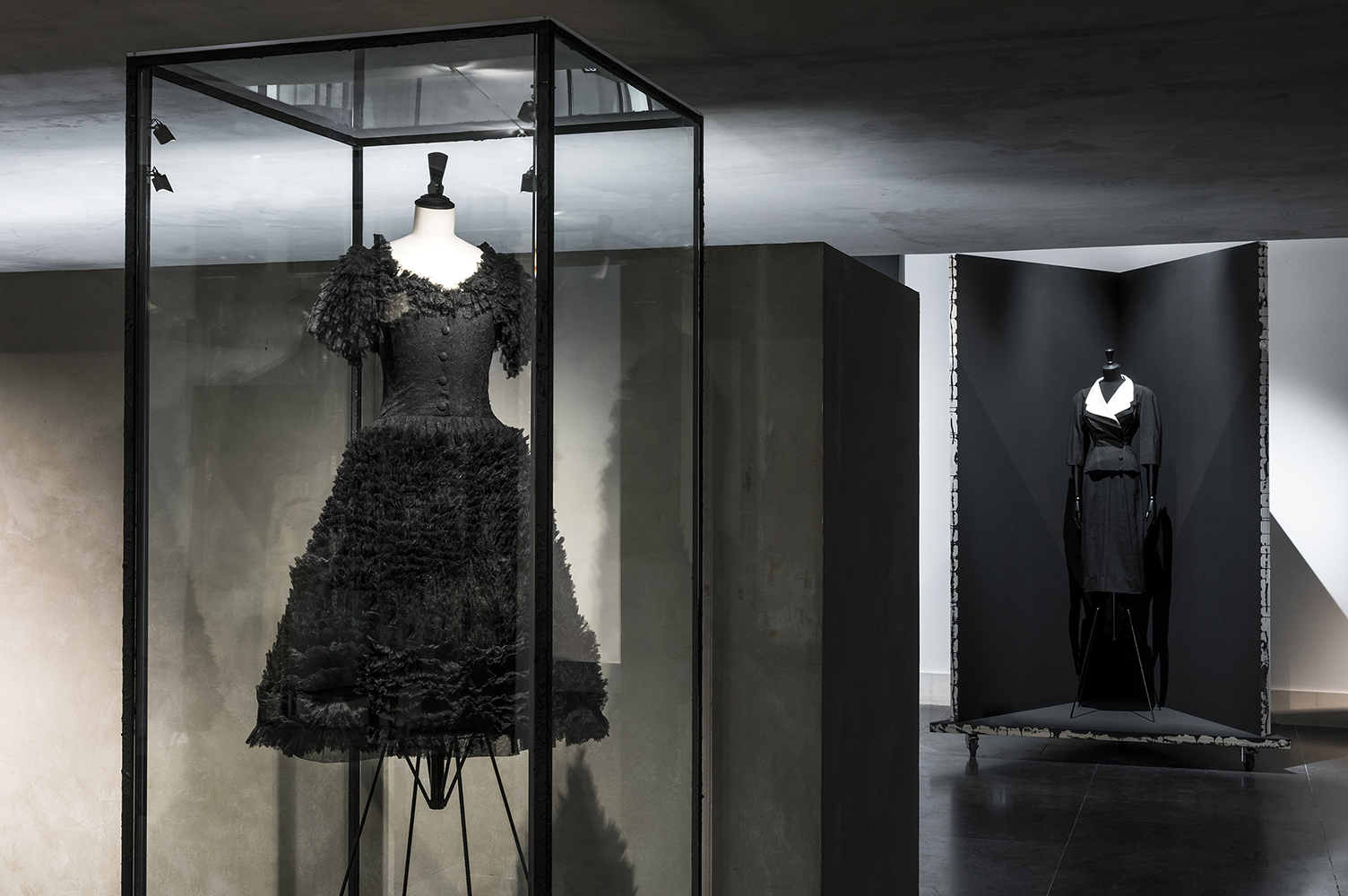 In many ways, black seemed to have simultaneously acted as an empty canvas as well as a rich narrative tapestry for Balenciaga. In the absence of colour distractions, tailoring expertise that allows isolated shapes and the overall silhouette to be manipulated, take the centre stage. Focus is immediately pulled in by the visual impact of the 3-dimensional form created in cloth. Yet, material for Balenciaga was anything but a secondary concern. Instead, with his restrained approach to lack of colour and rigour in form, the properties of fabric become heightened as a mechanism to enable shapes to be formed, whilst the surface – the very materiality of the textiles – communicate messages through touch and visuals. Inky velvet, dull heavy wool, shiny taffeta along with quilting, lace, embroidery and embellishments, all add tonal textures to the black mixture of materials. 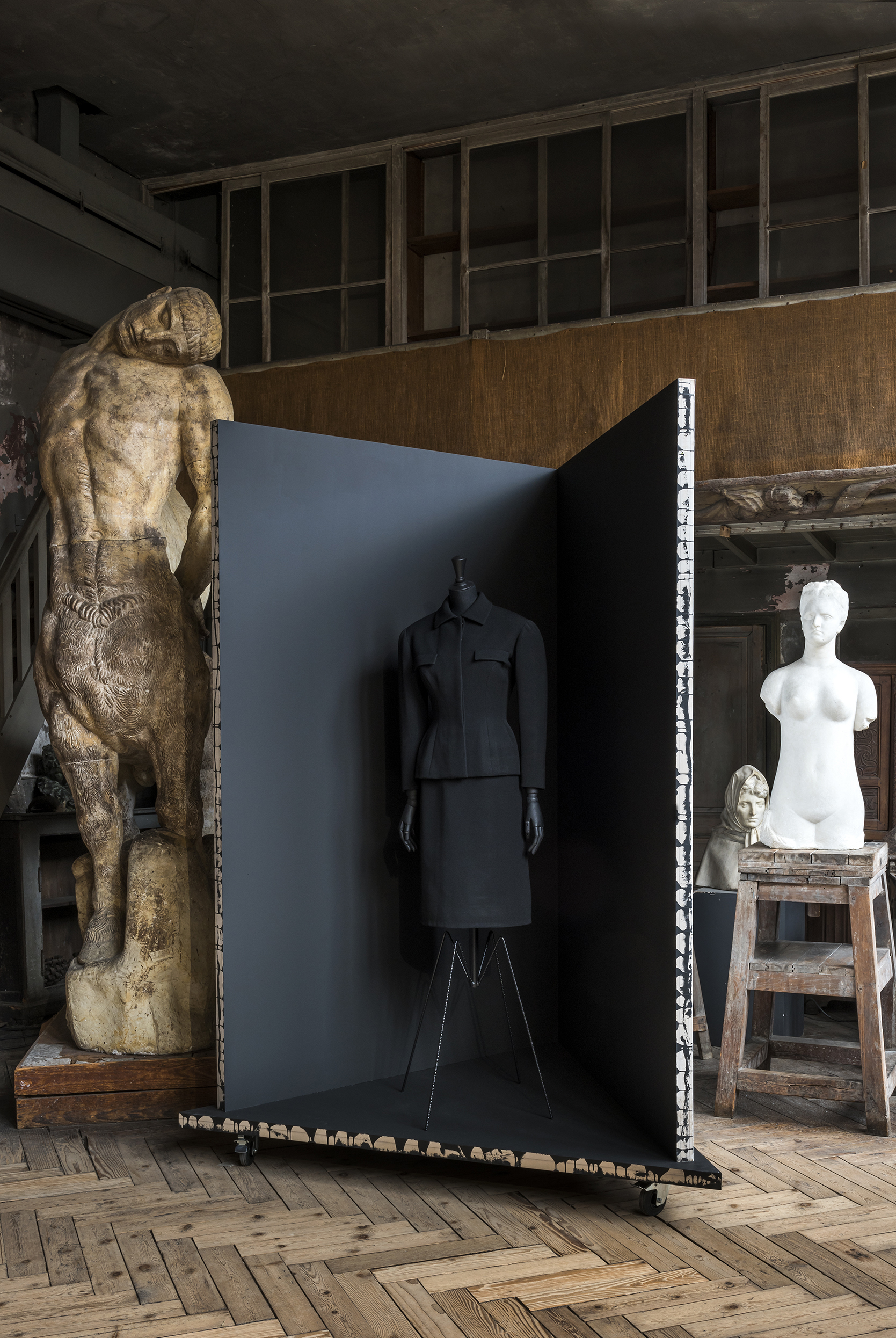 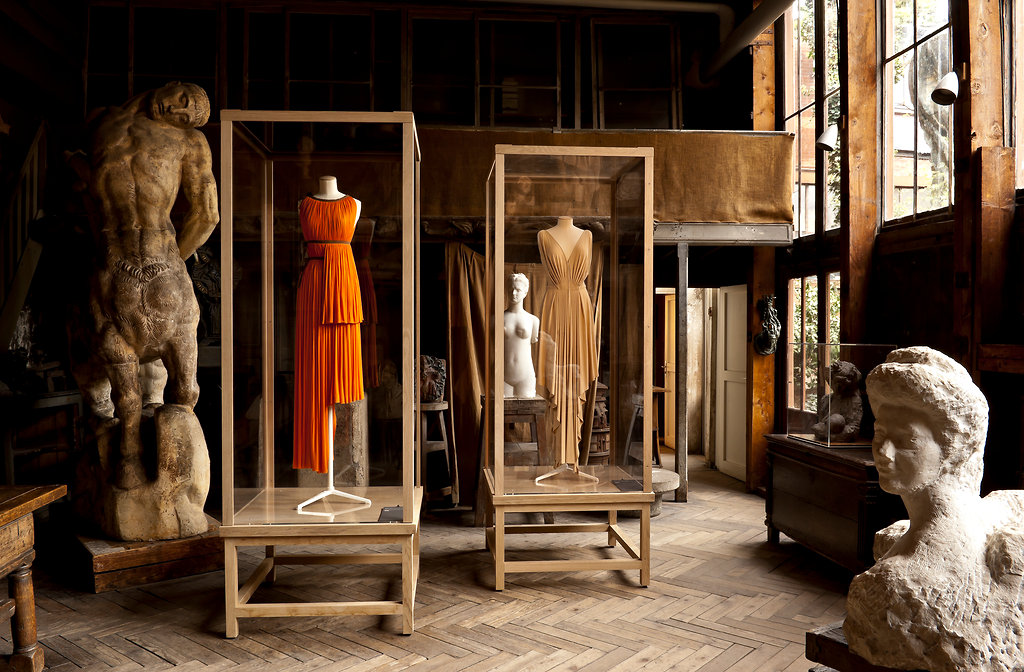 The dialogue between couture and sculpture is well-rehearsed. Despite the atmospheric setting at Musée Bourdelle that also served as the location for the exhibition about Madame Grès’ sculptural dress designs in 2011, there is no point is trying to force a deep connection between the works of Antoine Bourdelle and Cristóbal Balenciaga. Instead, it is impossible not to draw comparisons between Balenciaga and his successors who have all in some ways attempted to continue to work with the dark matter. Nicolas Ghesquière was, and still is, a brilliant texturist and a colourist with a strong connection with Balenciaga’s shapely sculpturing, yet his use of black was more of a footnote rather than a defining feature of his tenure at the house. Alexander Wang who served as the creative director between 2012-2015, was Balenciaga’s kindred spirit when it comes to the colour — yet, compared to him, Wang’s application of black remained colourless.  The current creative director Demna Gvasalia’s association with it has been rather more contentious and less to do with the clothing. His debut collection for the brand included only white models and outside the most recent Paris Fashion Week show venue, a two-woman protest with placards reading “Les Modèles Noirs Importent” aimed to draw attention to the lack of diversity in the Balenciaga show casting, and brought unwanted press for the brand.

But then again, black is in a different place now to when Cristóbal Balenciaga was working with it, so is the state of fashion design. For instance, for the first time since Henry Ford chose the colour for his Model T automobile (for it durable qualities but also because his “any color so long as it is black” policy helped to keep the production costs down), and Gabrielle Chanel created her own version of the T-Ford, the colour is showing signs of fading. Subtleties of black of course, do not photograph very well with camera phones and therefore it doesn’t have that instant Instagram impact that other more garish clothes do. And unlike the couturier, rarely do the designers these days take time or even have time to tailor and sew through which to acquire haptic knowledge and to enhance their understanding of dress design – so occupied are they with additional concerns around branding and marketing as part of their wider remit in building brands as creative directors – not, one should note, as couturiers and designers. 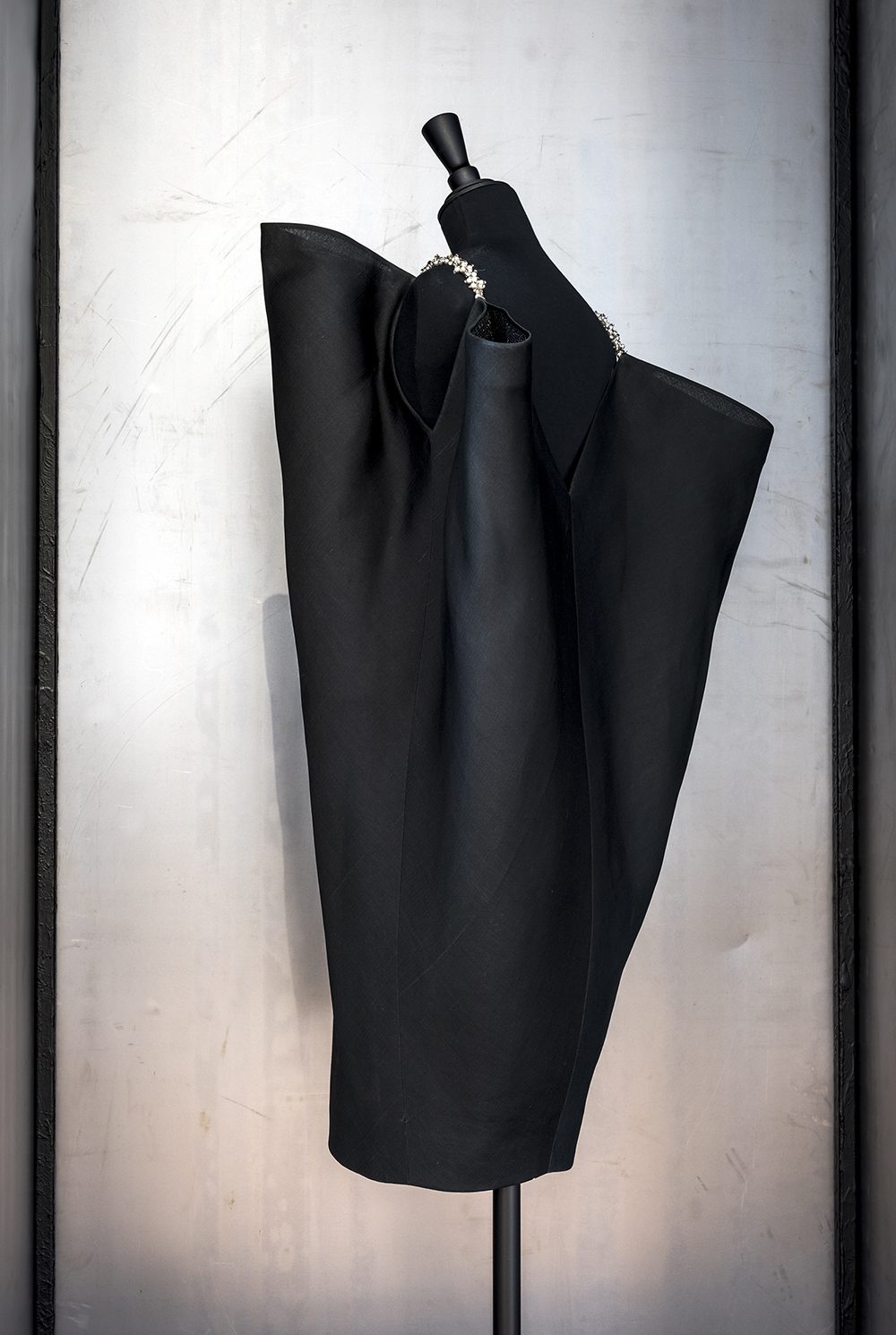 Yet, the enduring qualities of black placed in dialogue with Cristóbal Balenciaga’s singular and uncompromised approach to design results in a powerful statement that Véronique Belloir skillfully puts forward with her curation. Despite way in which this one colour frames the entire narrative, Balenciaga, L’oeuvre au noir in fact, highlights the holistic expertise that is required to create clothing that transcends fashion. With black, there is no hiding when it comes to craft skill as every seam and detail becomes visually ingrained in the results. Nor can you cheat with silhouette as this dark matter paints a sharp contrast through the outline it creates. For Balenciaga, black was more than a color. His legacy certainly cannot be reduced to a mere pigment.