‘Get a Room’ exhibition

New York based design laboratory Ab[Screenwear] attempts to extend the dialogue between technology, body and garments. Recently, the fashion label took over a gallery space to display their wears in an installation-cum-fashion-retail set up. Alexis Romano went to see the presentation titled Get a Room at the Postmasters Gallery in New York. 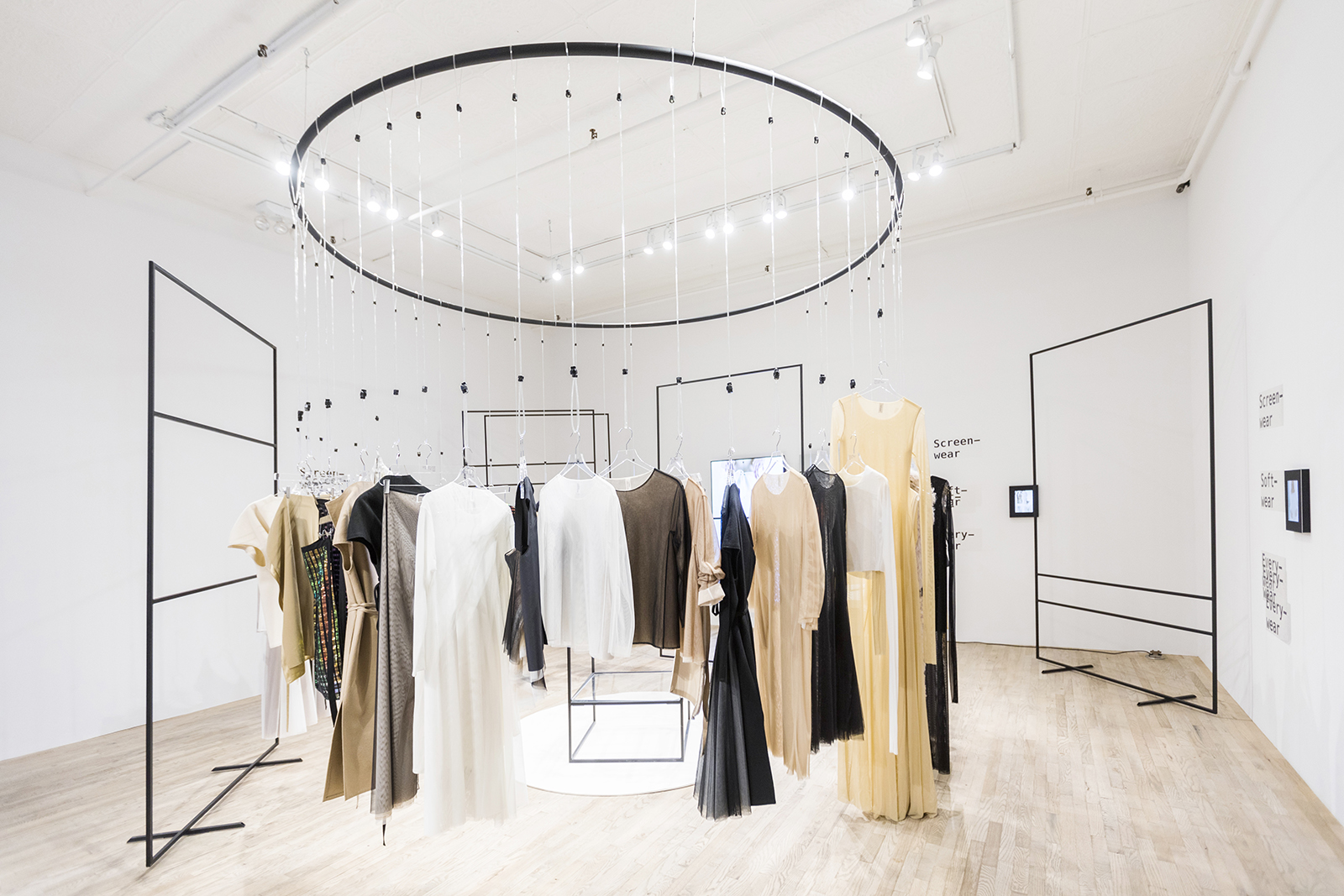 French cultural theorist Jean Baudrillard could not have predicted the label Ab[Screenwear] better when, in 1983 in his essay ‘The Ecstasy of Communication’, he discussed the pervasive power of the screen. In view of the penetration of the television and computer into our private spheres, he pinpointed a shift in the ways we see and interact with our objects: “In place of the reflexive transcendence of mirror and scene, there is a non-reflecting surface, an immanent surface where operations unfold – the smooth operational surface of communication.” Mourning the time when we mirrored and projected ourselves – our real and imagined lives – onto our things, Baudrillard wrote how our newfound “ecstasy of communication” with the public world – mass media networks, contact, feedback – came to characterize these relationships. The new object par excellence was the television, the screen image became the reference for the self, and the body a “control screen,” its physicality superfluous.

Olya Petrova Jackson, founder and designer of the bespoke women’s fashion label Ab[Screenwear], picks up where he left off. Recognizing our dependence on the digital screen, she views it as “an extension” of the body and “our medium for being in the world.” This is epitomized by one garment in particular, a jacket that launched the brand in 2015, whose light responsive diachronic polyurethane shell (with sleeves of cashmere or felted wool and later leather) references the materiality of the screen in its filmy, diaphanous sheen that changes in hue depending on what you are wearing (or not wearing) underneath. With this jacket, Petrova Jackson contributes to a tradition of design discussions around fabric and skin. She has said, “What I’m trying to explore is; if you put that [screen] over your body and it has all the capacities your phone has, to switch, choose, project, absorb with your fingertips, it might give you a completely new dimension as a human.” In a sense she embraces the notion of a mediatized self, what sociologist Agnès Rocamora argues in her research paper ‘Mediatization and Digital Media in the Field of Fashion’ (2016) is a result of how digital media shapes clothing production, presentation and retailing. Petrova Jackson seeks to take our screen focused, non-private connectivity and turn it into a positive reality. 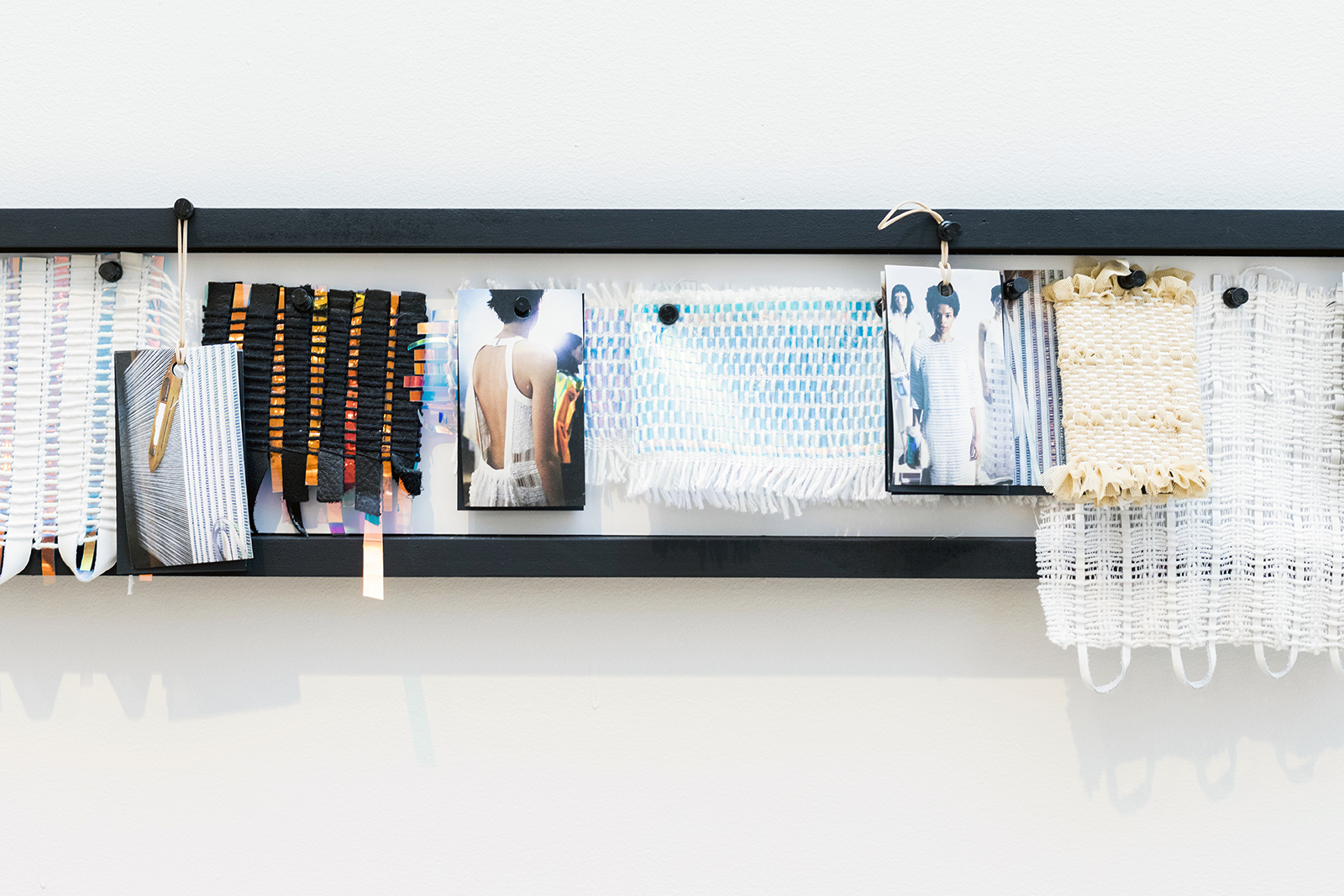 Viewers can see and try on the jacket (and much more) at Postmasters Gallery, where it’s on display in Get a Room until 2nd December. It is fitting that this setting, where Ab[Screenwear] deputed its first capsule collection at New York Fashion Week in February 2017, also serves as the space in which the brand further introduces itself to the public in an exhibition. Under the curatorial vision of gallery founders Magda Sawon, Tamas Banovich, director Kerry Doran and Petrova Jackson, it conflates and rethinks spaces and experiences – gallery, retail, digital, live, public, private.

The installation is separated into two sections: on one side is a ‘timeline’ that wraps around three walls, composed of imagery, screens and fabric, that tells the story of the brand. Haptic and haphazardly placed, the materials spill out over the frame and urge the viewer to reach out and touch. The screen theme threads the section together, as a filter or visual trope in imagery, as well as a video projection over the frame, onto the wall. The latter references online shopping and introduces visitors to Ab[Screenwear]’s code-based language system for garments, layers and materials. 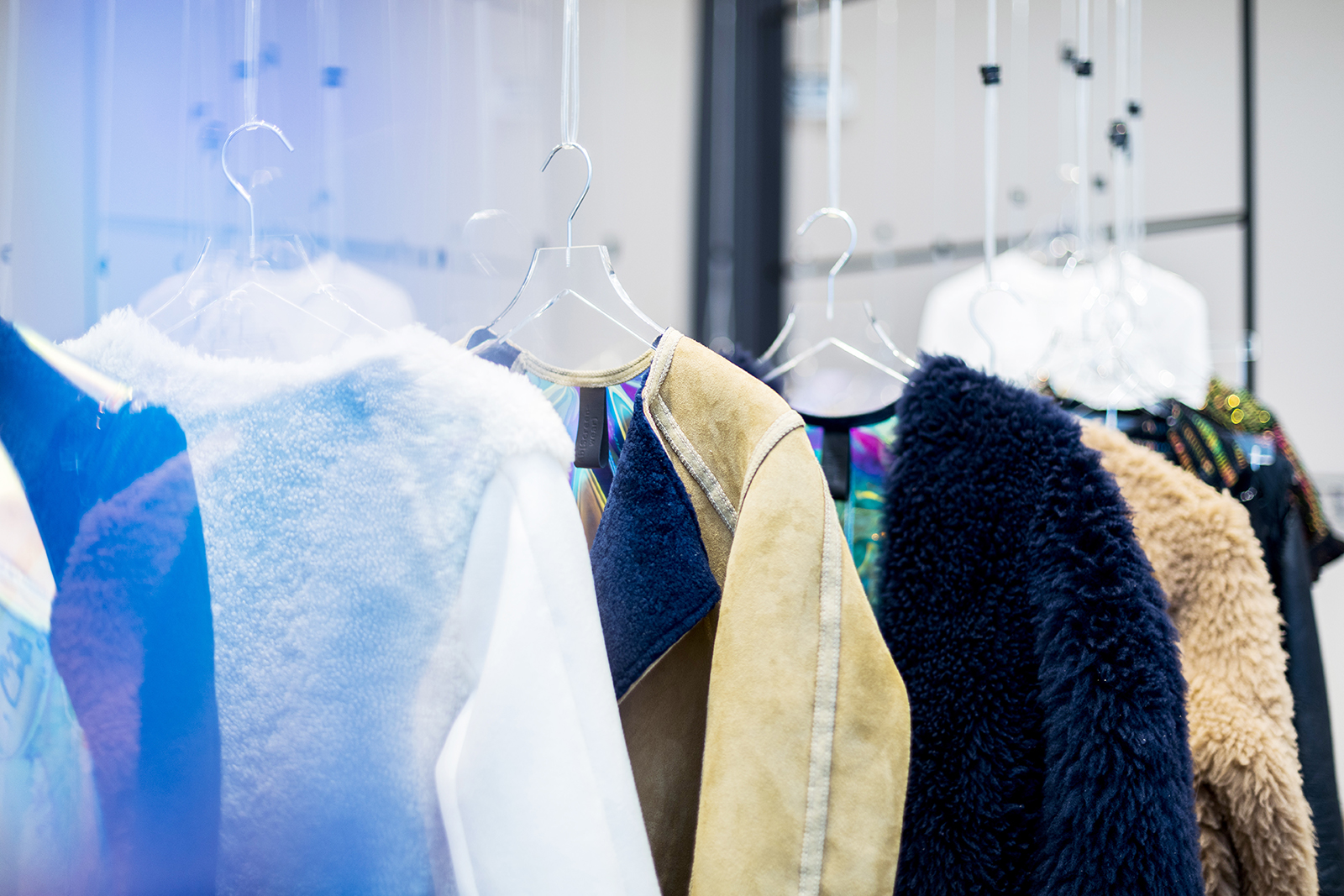 On the other side is a suspending circular structure from which garments hang, and a central focus of the exhibition. With the garments at eye level, visitors simulate the shopping experience of being lost among racks of black, white, and camel colored garments, while walking in a circular motion. As above, the minimalist, seasonless capsule collection invites viewers’ hands to explore the thick furs, smooth silks and leathers, intricately woven textiles (many upcycled) and, of course, the plastic shells.

Those who want to try on the garments, in all their textural, modular glory, need only make an appointment for a fitting in the gallery, which closes exclusively for the patron. Contrary to the screen focused exhibition elements and the mediatization implicit in the polyurethane jacket, this portion of the exhibition shields visitors from the public eye, in a way that harks back to the haute couture fitting tradition. In a private “Room” of their own, as the title proposes, they are afforded a retail space to reflect on the wider meanings of the clothing and the feeling of being dressed in them. The experiential nature of the show enables this self-questioning, a goal of a majority of exhibitions of fashion. During this time is hoped they will ponder how these various sartorial experiences – in person and on screen – function together as we move from postmodernism to digimodernism.

Alexis Romano
New York based design historian Alexis Romano is co-founder of the Fashion Research Network and Exhibition Reviews Editor of Textile History and works as a freelance lecturer and curator. Her current research looks at readymade fashion as it relates to women’s experience and the visual culture of postwar France.