I went shopping to find out. The Westfield centre in Stratford in East London, to me, is a kind of hell. Every shop pumping music from dodgy speakers, too many people lacking spatial awareness, and it’s hotter than the Mediterranean in June. Not great for puffa jacket wearers in doors, especially if also wearing thermal undies. However, I thought it a good location to meet people wading the last dregs of the January sales and incoming fresher stock. To have a look at what is new in fashion, or at least find out people’s awareness of what is new in fashion.

If you like this intense way of shopping, and many seem to, the Westfield centre is Mecca for the worship of stuff. You can jump on the overground train, leave your coat in the cloakroom, and spend all day shopping in the heat. It’s also a great place for people-watching. I observed a number of groups of friends dressed identically, carrying the same shopping bags even. One group in particular, three mid teen girls, were dressed head to toe in leopard print, and I mean head to toe; from their self decorated faces, an asymmetrical leopard print starting from the left shoulder (as far as I could tell), up the neck, climbing the cheeks, finishing over their left eye or brow – right back down to their gold studded pumps via printed jersey and faux fur. Certainly, that was new to me, in an everyday shopping environment at least. It’s more complex spotting newness in fashion now compared to previous eras. Arguably, impossible. When Dior’s New Look[ref] 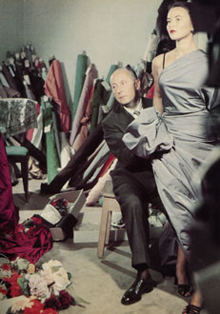 Source: Christian Dior Photograph by Bellini Archives Christian Dior, www.designmuseum.org[/ref] arrived in Paris, during February of 1947, the clothes, silhouette with meters of fabric sprouting from the waist, really were new to look at and when you take into account what was happening in Europe at the time, increase in affluence and availability of fabrics post war, it fits. It was a stepping-stone, a point of time when a look could identify itself as the one all women should aspire to, as had been the case for centuries. You’ll be able to think of your own obvious examples of clothing that were new, or worn in a new way. Remember the big fuss when David Beckham wore a sarong?[ref] 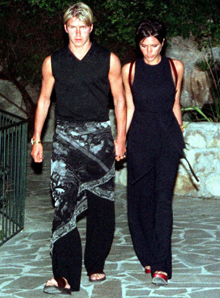 Source: David Beckham wearing a sarong with wife Victoria,  Source: Absolute/D’Arcangeli, www.telegraph.co.uk [/ref] It’s not as if the Ancient Greeks hadn’t already totally done this with draped rectangles, but in our time, then 1998, on an English footballer, it felt new. The Ancient Greeks also wore shortened hemlines and for tribal cultures the world over, to wrap a small piece of cloth around the groin is still commonplace for a man or woman, and has been since the year dot. But in the social context of London in 1965, a shock when Mary Quant gave us the minidress,[ref] 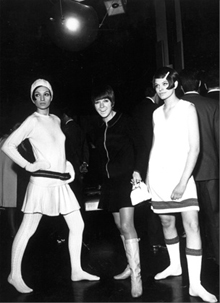 Source: Mary Quant, Getty, www.vogue.it [/ref] along with it’s shortened hemline, plain silhouette and use of bold colour blocks and print, emphasising it as new. 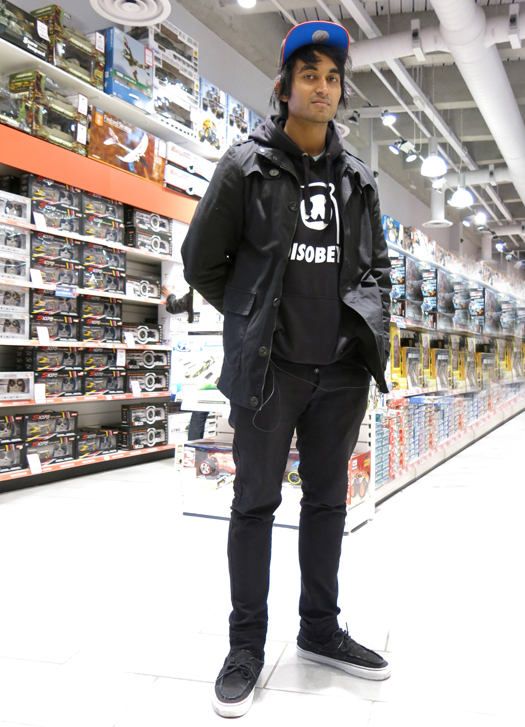 Warren, told me what he thinks is happening in fashion today ‘Depends, everyone’s going for swag,[ref]’Swag is just your image, your appeal, like your look, like how sharp your look is. I’m sure you’ve heard the word before. Everyone’s got their own definition, it’s just how you look, are dressed, well dressed or overdressed, depending on how you dress and that’s basically it.’ Quote: Warren[/ref] everyone’s going for different looks. But the new generation of fashion is all about skinniness, how to show off your body in a way that’s not too sexual. A lot of people wear a lot of skinny clothes and big jumpers to create an image. But most of it’s that fashion incorporates with music. So basically everyone’s fashion is influenced by music.’

Are you wearing anything new or a new style?

‘Not really, I’ve always worn black, that’s my colour. I always go for a jumper and skinny jeans. If you notice a lot of people are wearing Vans. If you wear skinny jeans basically a lot of people always wear Vans and very thick coats, or allsorts of randomness. England’s got allsorts of random style, if you go to Australia it’s the same. It could go either way, everything’s going back to the eighties. Some people are going futuristic with very short silver-ness, it could stay the same for the next 10years, I don’t know. All depends on music genres, that’s my opinion. All depends on music.’ 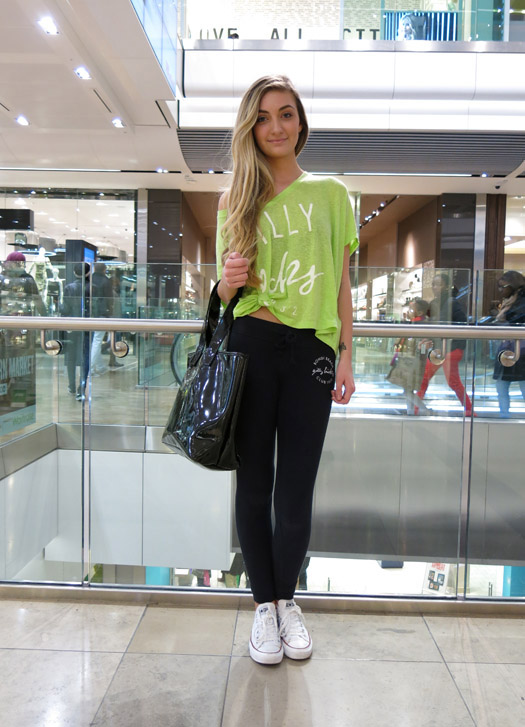 Chloé, Is this all part of your regular style?

‘Yeah mainly, I’d wear these out, like, even when I’m not workin’. Quite laid back natural beachy look I like to go for with natural hair. It’s made me more like laid back if anything. Before I had like jeans and pumps and I’d be more dressed up, as much as I could. And now I’m more comfortable with going out in these and just like kinda feel nice.’

What do you think is new in fashion?

‘Colour wise, for Christmas time it was all wine colours like burgundy, now it’s gone pastel colours and lace, pastel bras. People just normally wear like jeans with a dressed up top, like a lace top, a peplum sort of top. Or peplum dresses, to just above the knee. Not too short and like tight, and heels. Beanies are new, quite a lot of the girls are wearing beanies, I’ve seen. I always wear bobble hats quite a lot. You look fashionable in the winter instead of all wrapped up. They’re like practical but they still dress you up.’ 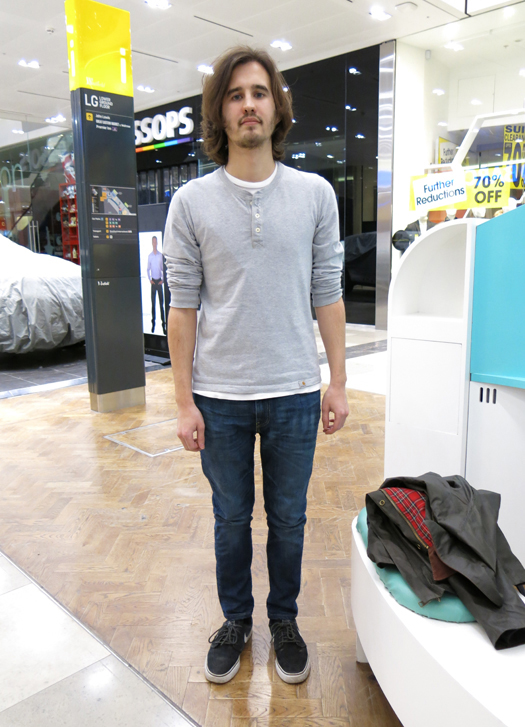 Matthew, what’s the latest piece of clothing you bought?

‘That would be a jumper from Zara, a burgundy piped jumper from Zara, it’s not my usual thing that I would wear but my girlfriend wants me to dress a little bit more my age. More shirts, less t-shirts, shoes instead of trainers. Being, and dressing smarter I think. Cause I was a skateboarder for like seven or eight years so that sort of way of dressing has you know followed me. And now my girlfriend’s not best pleased about it, I can see where she’s coming from. And obviously I’m getting to the stage now where I’m looking for jobs and, like decent jobs, and that kind of impression, you know it makes an impression on people, people treat you differently I find, depending on how you dress. More and more, like before when I was younger I didn’t really care butnowadays I’m supposed to be you know responsible.’

‘I’ve been liking, like I said, the jumpers, hmm, this is difficult for me, I tend not to dress like anyone around here so it’s hard for me to er say.’

Regarding newness in fashion, anything you want, you know you want but can’t find?

‘Yes! Something that’s more kind of plain but also different in a sense. A lot of the time now, people are making like t-shirts with like a different kind of pocket. So for me, something that isn’t too out there, but has something different about it and is nice quality, that’s the important thing, which is what I like about the Fred Perry stuff. Cause it’s nicely cut and in my opinion anyway, nicely made. If you wear a cheap plain t-shirt, you can see that’s it’s poorly made, compared to one you’d spend 30 or 40 quid on, even though it’s just a plain t-shirt. I’m not sure if that answers your question? I’m not fashion forward in that sense like, I try to wear what I would like to wear rather than like seeing what somebody else would wear and think oh, I wanna do that. You know, like I want to look like that person, in a sense.’

‘A lot of people round here wear like studs and that. But you see I wouldn’t consider it a good trend if places like Topman are copying it and places like that. That makes me not want to do it. Trying to be more like myself, which again is farely sort of plain, nicely fitting sort of plainish clothes. There’s a new skateboarding company called Palace which is quite popular, I can see, cause that whole sort of street wear thing. Talking about trends I notice a lot of skateboarding brands have been taken up and are being worn by the general public. A lot of companies like Palace and Supreme as well.’

Chloé said she finds it hard to find the perfect pair of shorts. ‘..that are not too short, cause you either get the really like really long cropped ones or the really short ones that I don’t really like too much. It’s quite hard to find a good length in like Topshop and that.’ Both Warren and Matthew commented on Vans being worn on mass. Matthew, in particular, remarked on the line brands teeter between cool for the select few or cool for everyone except the people who were first into it, who now don’t want to be because everybody else is. He said he’s not frightened to spend a long time looking for that perfect top that’s well made, a good fit and has something to say that separates it, and therefore him, from the mass market. As I interview, it’s a new year in a relatively new shopping centre. New stock has arrived and the world’s main four fashion shows are about to kick off with New York. So much potential for newness, yet it all feels rather flat. Shouldn’t newness in fashion be more exciting? Or have we entered an era when all we want is for clothes to be more satisfying.Speaking with people that day, shoppers and shop assistants alike, they’re aware of fashion but didn’t seem after anything shockingly new, they’re happy to have variations of better quality, better fitting clothes of what they know they already like, even if it means holding out for a long time to find it. Clothes slightly different to their peers, but not too different, making a garment like a beanie, neon could do it.[ref] 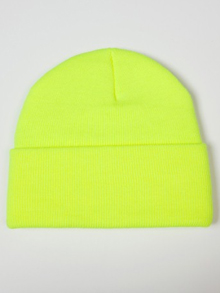