Fashion scholars play a key role in unpacking and shaping the way in which we understand fashion. As well as finding out about the people behind the books, thoughts and theories, in this new series, Address asks academics about their views on fashion educations, research and the industry as a whole. For this first interview, Address contributor Emily McGuire went to meet fashion scholar Jennifer Craik. 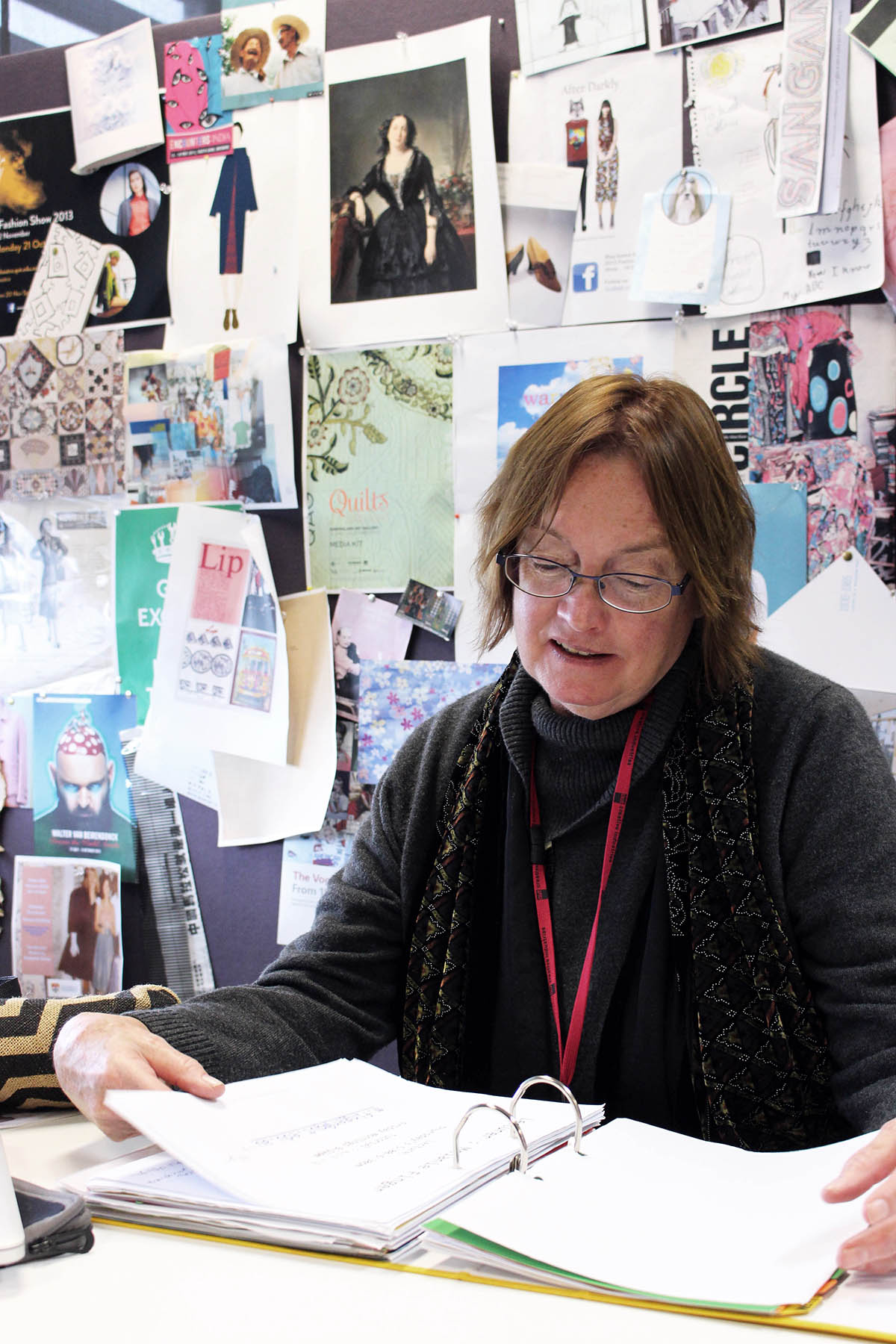 The voices of fashion academics are not often heard over the noise of fashion’s media circus. When not buried under piles of research, they are shaping the minds of fashion students and enthusiasts alike and preparing them to navigate the glossy illusions of the fashion world. As educators they provide critical, meaningful, and empowering ways of engaging with fashion so that flicking through an issue of Vogue becomes an exercise in flexing your understanding of the inner workings of contemporary fashion culture.

As one of Australia’s most internationally renowned fashion academics, Jennifer Craik has made significant contributions to fashion education and research. Currently, Jennifer is an Adjunct Professor in Fashion Studies at the Queensland University of Technology. Prior to this she was Professor of Fashion and Textiles at Royal Melbourne Institute of Technology, Australia. Jennifer has also published several acclaimed books including The Face of Fashion (1994), Uniforms Exposed (2005), and Fashion: The Key Concepts (2009).

Spending countless afternoons during primary school at her neighbour’s house looking through issues of American magazines like Vogue and McCall’s, Jennifer’s interest in fashion developed early on. “I also had little cutout dolls with little cutout dresses, the paper ones. That was really my starting point. My family thought I was completely nuts and probably still do, I imagine! I also used to design clothes and do illustrations right through high school. There wasn’t a great availability of trendy clothes for teenagers. My sisters and I used to do a lot of home sewing. I don’t think there was any place you could study fashion so when I went to university I wanted to do arts, although my parents weren’t so interested in the idea.” 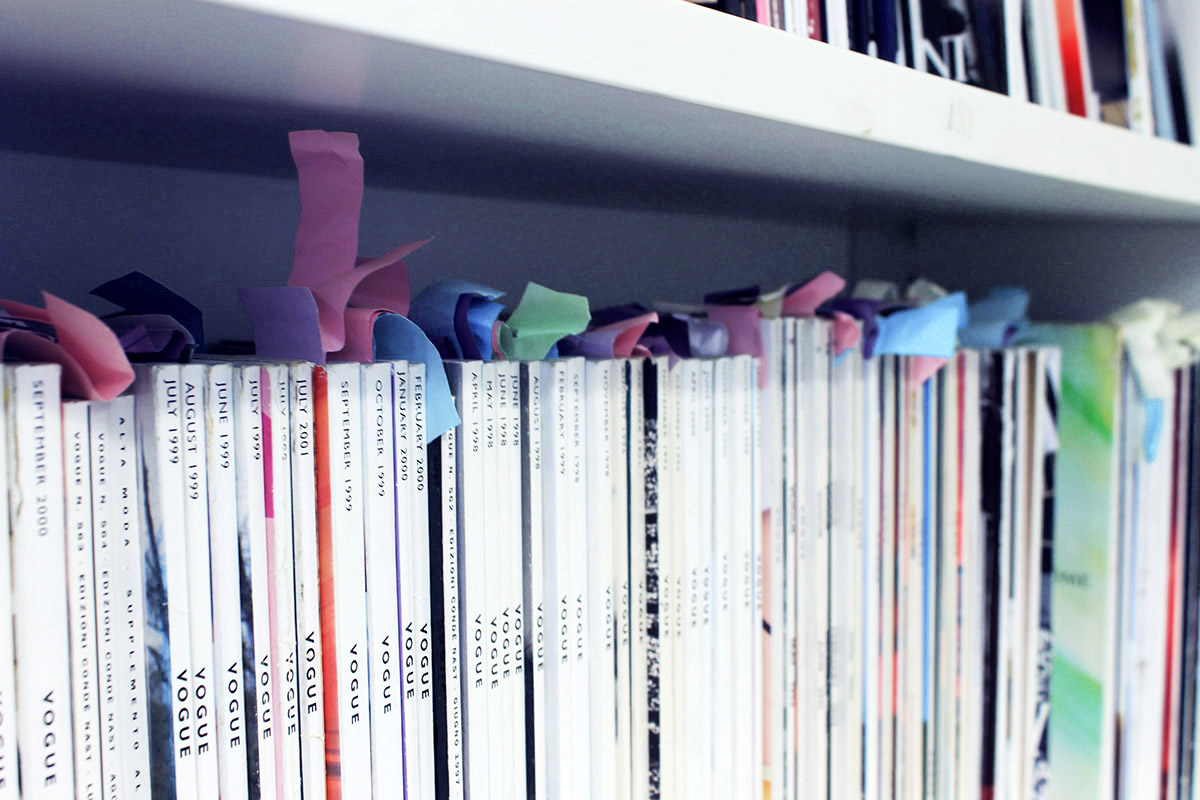 The Vogue archive at the fashion offices, QUT

Jennifer’s pathway into fashion academia came later after completing her PhD in Social and Political Sciences at Cambridge University in UK. She then returned to Australia in 1980 to teach Film and Media Studies at the School of Humanities at Griffith University in Brisbane. “One of the subjects I was teaching was called Contemporary Culture, which was basically different parts of popular culture – we would have one week on architecture, one week on fashion, and so on, with something different each week.” Jennifer said this was the first time she had really engaged with fashion in a scholarly way. “I really enjoyed teaching this subject about popular culture. I particularly liked being able to teach fashion and finding out that there were serious books and theories about fashion. But also, I was interested in the fact that different areas of culture have very similar kinds of issues and critiques about them, what’s now called the cultural industries. So, this was really how it all began, and it was out of that teaching and then expanding into other subjects, like media and cultural studies, that The Face of Fashion book came about.”

A lot has changed about fashion studies during Jennifer’s time as an educator. “When I wrote The Face of Fashion, most fashion studies only appeared in art courses, or in curatorial studies focused on curating dress and costume rather than fashion. There was a costume society in the UK, and a dress society in the US. So, just the use of those terms indicates the division of research. They were very hostile toward any cultural study approach, which was what The Face of Fashion was developing, because they didn’t think of it as relevant. This also meant that fashion and dress were only considered from very particular points of view. If it didn’t fit into the museum frame or the art world, then it wasn’t really taken seriously. This was the same as other cultural forms, which is something that really struck me, that culture was regarded as quite trivial and not scholarly, like tourism, for example.” 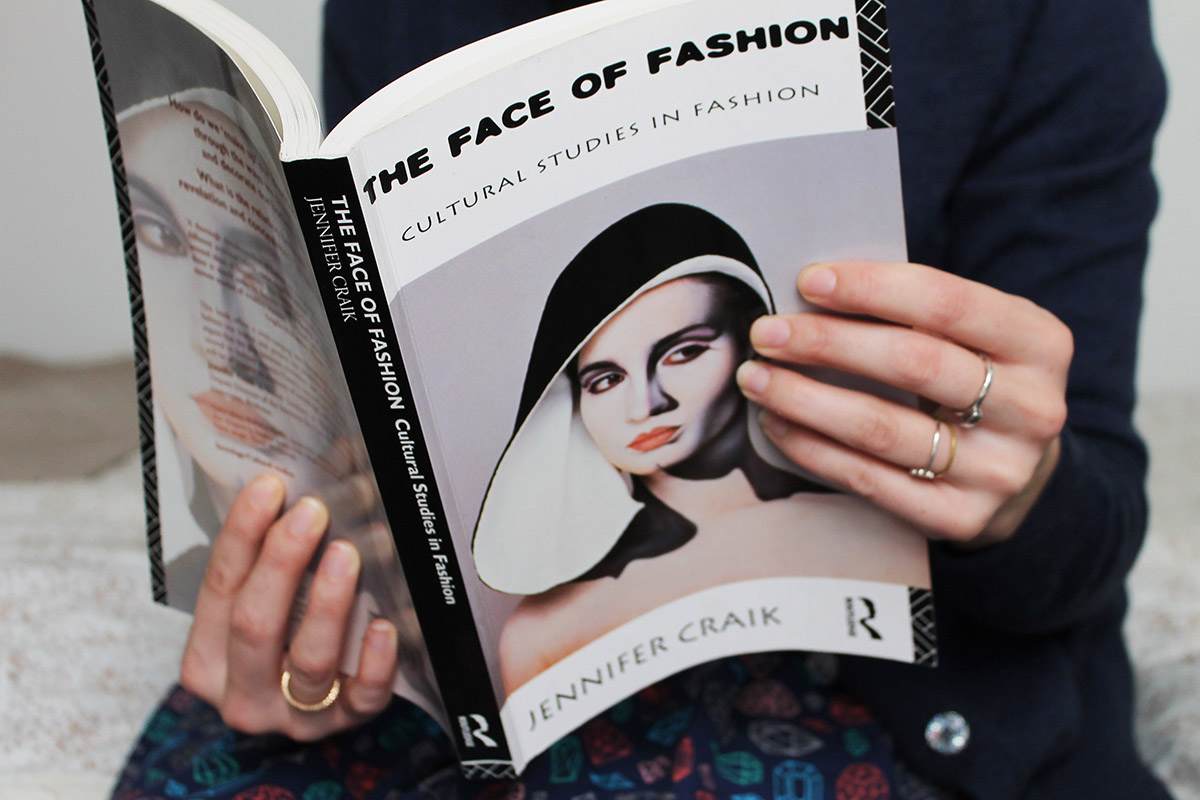 The Face of Fashion (1997) by Jennifer Craik

Initially, fashion courses were divided quite bluntly into either curatorial practice or courses focused on practical making and technical training with less focus on theoretical or historical content. These days, there are a lot of new fashion design courses and colleges emerging. Jennifer thinks there are now over 30 fashion courses available across Australia (the last time she checked). However, she also points out that this hasn’t correlated with an increase in fashion theory studies. Here, there’s a kind of disconnect between the emerging popularity of fashion criticism and the presence of critical engagement with fashion in education. “The amount of theoretical and historical content about fashion included in degrees across Australia actually remains quite low. Where it is included, it’s usually more like an overview, which is really quite superficial. I find with final year fashion students they often haven’t heard of either Jenny Kee or Linda Jackson, who were a huge part of recent Australian fashion history.”

Ironically, although studying fashion has become increasingly popular, it seems that historical and theoretical knowledge are of less interest compared to skills in design, business, and garment making, subjects that are typically romanticised in fashion media. Jennifer agrees that this approach to fashion education perpetuates a disinterest in critically engaging with fashion, and continues the stigma that fashion is not really worthy of scholarly thought despite its popularity at academic institutions. She believes that many fashion design courses are lacking in providing substantial cultural knowledge to give students a more rounded understanding of fashion’s inner workings. It’s this kind of knowledge that can bring depth and complexity to design work.

“They put a lot of pressure on fashion practice rather than critical or historical engagement and that can be really problematic – you make up a couple of things and display them with a one page statement and you can get your degree. And this leads into the whole idea of fashion being trivial, it really makes the situation worse rather than better.”

Jennifer also touches on the ongoing dilemma of students being lured into design courses seduced by the fashion world as a place for glamorous celebrations, beautiful people, leisure and luxury. But working in the industry can bring an entirely different, and considerably less glamorous experience that entails hard, thankless work. “A lot of students who enroll in fashion these days because they like pretty dresses and think fashion is really glamorous. It’s quite the same with students who enroll in hairdressing or nail art courses. There’s massive drop out rates for students enrolled in courses like that because the reality is completely different. And it’s the same with fashion – students can have the wrong motivation.” The desire fulfill that covetable dream of working in fashion design is also often at odds with the opportunity to do so. Jennifer notes that “there’s more jobs not in design, and they’re much better paid”. From her industry experience Jennifer points out that a lot of creative practitioners are “having to do other jobs to support themselves because there’s so little money in the creative bit”. 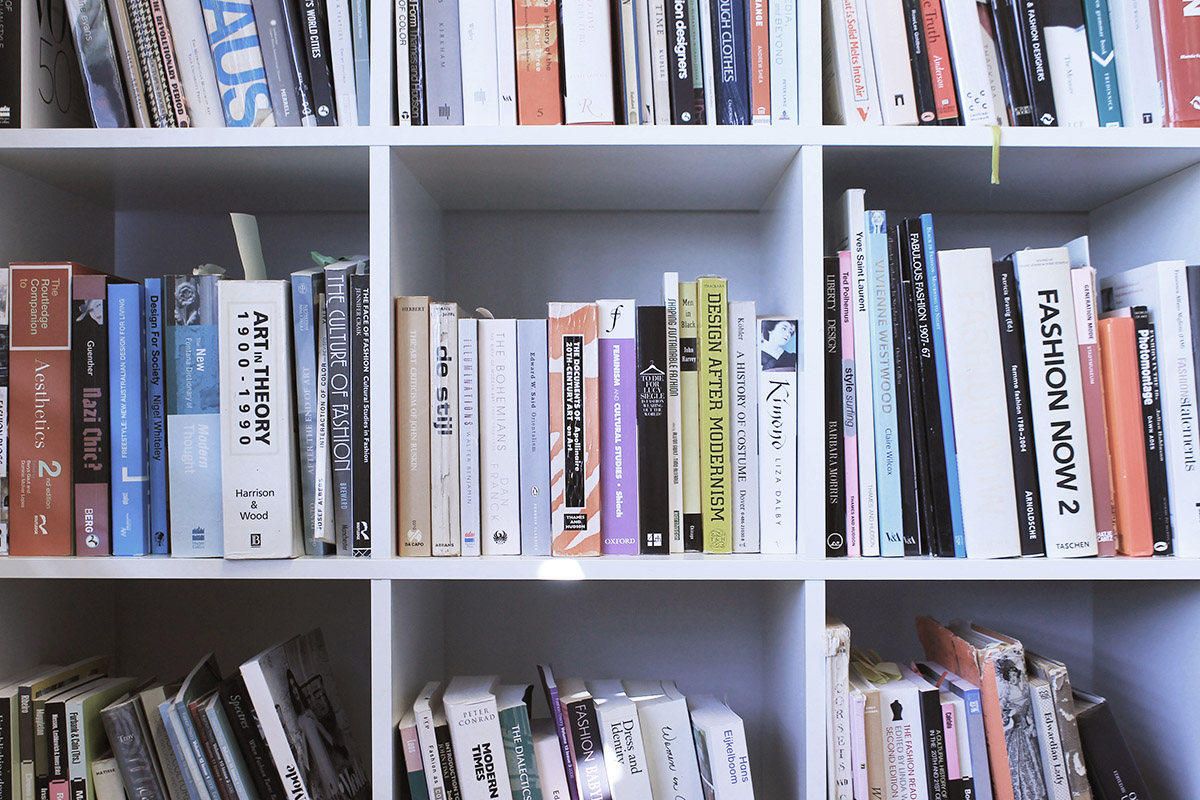 To improve learning and career outcomes for future fashion talent, closing the gaps between education and industry needs to be a priority. Currently, government, council, and organisational support for fashion careers are low in Australia. Although the Australian Fashion Chamber offers a mentorship program, there is a $100AUD annual fee to join and it’s only for prospective fashion designers. The Australian Fashion Council provides a number of grants and awards, but these are also mostly focused on fashion designers or small businesses generally rather than fashion businesses specifically. Deceptively, ‘prizes’ sometimes include unpaid internships. To avoid this kind of disconnection within Australia’s creative economy, Jennifer agrees that the fashion industry here needs to closely follow the lead of organisations in places like New York City and London, which invest in initiatives that provide funding, mentorships, and structured industry experience to emerging fashion practitioners across diverse areas of the industry. She also believes that in fashion education “there’s certainly not enough on all those jobs like styling, merchandising, product development, all that kind of stuff is only addressed as part of an overall course. When they do teach stuff on industry or business they tend to have people who aren’t fashion specialists trying to retrofit it for fashion students, and that really doesn’t work. There’s an absolute myopia in still trying to continue to teach either fashion design or technical stuff, and just ignoring this whole area where the growth is”.

Although fashion is becoming increasingly popular as an area of study in Australia, its image is often shrouded in unrealistic, romantic ideas about fashion designers and the industry. The increasing presence of technical fashion design courses might satisfy popular demand, but this has been met with a continued lack of opportunity for students to also look at fashion through a critical lens. It will be interesting to see if and how Australia’s fashion education system begins to address this issue to ensure prospective fashion students are equipped with the skills to engage with fashion critically as well as creatively. As Jennifer said, “fashion education is early days in Australia”.

Emily McGuire
Emily McGuire is a sessional academic in undergraduate fashion theory subjects at the Queensland University of Technology in Brisbane, Australia. She recently completed practice-led postgraduate work that explored the complex relationship between Tumblr blogging, fashion, and female identity.