Every collection starts with a concept. It provides a frame of reference for design generation, a narrative for development and a focus for editing. It is the holy grail of fashion design thinking now. Since tailors and dressmakers became Fashion Designers, on a par with artists, the concept behind a collection has become a paramount component. Each collection just has to have a concept and the more ‘complex’ the concept, the more ‘conceptual’ designers are labeled. The more conceptual the designer is, the closer they are of being a true artist.

Having been invited to few student collection reviews recently in some of the UK’s leading design institutions, I was struck by just how concept driven students are now. It seemed to me that it was the concept that mattered and no one confessed to just wanting to design beautiful/practical/smart/relevant clothing – which is the criteria most of us use when make our buying decisions. What came across was that the students preferred to see fashion as art and themselves as future artists in this equation. It didn’t seem to matter if a piece of clothing was aesthetically beautiful, never mind commercial – as long as it best communicated the concept. Now, don’t get me wrong, I think concept is a vital red thread in building a collection. And I certainly don’t just place the responsibility to the students for this: part of is the way we discuss the idea of ‘concept’ in educational environments that needs rethinking. But there is a dangerous line between allowing the concept to help the process and letting it take over the collection.

Someone who walked the thin line between concept and collection during the January 2013 London Men’s collection presentations for a/w 2013 was Central St Martins Graduate designer Craig Green. This was Green’s first show as part of the Topman sponsored MAN showcase where three up-and-coming designers are given three seasons to showcase their collections. Against Astrid Andersen[ref] 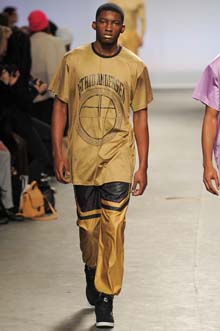 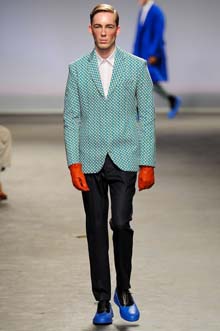 Source: Style.com[/ref] – both in their third, and last, season with MAN, Green’s collection stood out as being the most relevant but also the most problematic.Green’s first look, all navy, consisted of ankle length loose trousers and two tops in varying lengths constructed using a variety of textiles. But I doubt the audiences’ attention was on the outfit, rather more it was on the wood construct ‘mask’ in front of the model’s face. Sometimes fashion is veiled in pompous-ness: this time, literally, obscured with plywood constructions. Under normal circumstances, I would just blame the stylist and styling – like with Yohji Yamamoto s/s 2012 where models were made to look as if they’ve just been to a fight[ref] 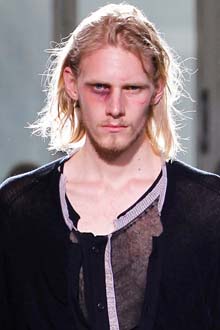 [/ref] (inappropriate), or with Daks a/w 2012 collection with the plaid and orange tophats[ref] 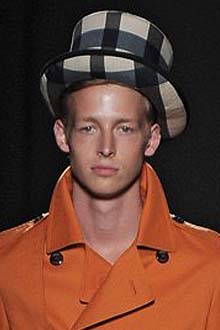 Source: Style.com[/ref] (just stupid) – but this time, I suspect it’s part of the designer’s bigger artistic vision. It is hard to even understand, never mind explain, the masks beyond just giving a description of the aesthetics. And anyway, the problem of these constructs was already summed up by the UK tabloid, The Daily Mail – known for perhaps a less sophisticated take on reportage. In their coverage of Green’s collection, the paper included the following puns:

“Carpentry chic: Four by twos made for unusual accessories at MAN – but could you get through airport security wearing these?”

Of course The Daily Mail is going to react this way – I wouldn’t expect anything other than an obscure reference to airport security, which makes no sense. But there is a bigger issue behind this. It troubles me when fashion, which in the UK contributes £21 billion to the UK economy and supports 816,000 jobs, making it the largest employer of all the creative industries in the country, is treated like this. Surely there is a responsibility not just for the media, but also designers themselves to maintain the integrity of fashion design as a discipline and ensure it’s seen and treated in the right way.

In some respect, one expects looks like this to be shown in London. The beauty of the city is that it attracts talent from all over the world to study in some of the best design schools and to work in the nurturing creative environment the city has got to offer. Unfortunately it is also the city’s downside, as London both benefits and suffers from its own creativity and cool. It is widely regarded as the city where young creativity flourishes, but look at the show schedule and only a few big brands showcase here, attracting less buyers and editors. It seems that when a London designer reaches a critical stage (and very few do) in their business they migrate to Paris. In an industry, which gets easily exited about the new generation of designers and their new ideas, it is important to remember that that only a few will mature to the stage where their collections will survive the tough climate of the shop floors around the globe. Fashion is an equal amount of business just as much as it is creativity: a balance only a few get right.

The concept of Green’s début collection was shadows, but this collection was overshadowed by the concept. What a shame, as the clothes underneath are so promising, and I will be checking out the navy patchwork knits once they reach the stores.  And I look forward to seeing more from him come June. Hopefully then, there will be more focus on the great clothing he obviously can create.

Tags: a/w 2013, catwalk review, Craig Green
Posted in UNRAVELLING… | Comments Off on Craig Green A/W 2013 – Look 1
This website uses cookies to improve your experience. We'll assume you're ok with this, but you can opt-out if you wish.Accept Read More
Privacy & Cookies Policy
Necessary Always Enabled