Fashion is produced and consumed in vast quantities. Take luxury level fashion brands for instance – they are all committed to making not just the seasonal s/s and a/w collection but also mid season resort and fall collections. Only fractions of the designed collections are seen on the catwalks, which in most cases are reserved for the edited statements. Then there are of course the diffusion lines, childrenswear lines, sportswear or denim lines as well as bags, shoes and jewellery lines along with the rest of it. On the high street and value sector, the production is even larger with vaster quantities, bigger ranges and higher turn around.

When we think of fashion criticism, we have come to associate it with catwalk reviews in which the critic aims to capture the look of the collection, interpret the inspirations and sometimes contextualize it against the wider cultural frameworks. Over the years this has evolved, particularly with the emergence of the Internet.  The Pre-Internet fashion critic had the task of describing collections to an audience who wouldn’t have had access to images, videos or to the actual shows. With limited visual references, reviews were packed with description in order for the reader to get an accurate picture of the collections. The materiality of garments was important.

Post-Internet reviews are very different. Go to Style.com for instance and right next to the review you will have access, not only to the front view images of the collections, but detail shots as well. If you are lucky there is an accompanying video of the show through which you will get a sense of how the garments moved on the catwalk. Of course this is not a substitute to seeing the garments in real life but it gives you a pretty accurate view of the collection in 2-dimensional format.[ref]If only they had side and back views as well.[/ref] And this means that the reviewers are having to spend less time in describing the collection and more words can be used to capture the atmosphere and analyzing the collection concept. Describing the show music seems to be particularly relevant to some critics where the review of the show spectacle seems more important than the actual clothes.

I want to approach reviewing fashion differently. Instead of attempting to capture whole collections, the focus will be on individual outfits and garments. Of course collections are important as part of the production of fashion, but not everything is worth writing about. From the offset, I have to admit that I do not attend shows because of the culture surrounding them. This of course inhibits me in some respects in fully understanding the qualities of a garment[ref]…though at a catwalk show you do not really get to see and feel the garment either…[/ref] but allows a distance from the industry that demands sycophancy and constant pampering with superlative adjectives.  But I will of course seek to see, touch and feel garments that I’m writing about when possible or necessary, as this is a vital part of the multisensory experience garments can give us. However, the written pen portrait, like its drawn counterpart, cannot and does not attempt to capture life in the way a photograph does. Instead it is an interpretation: allowing the freedom for detailed and descriptive examination of the subject whilst picturing it against its circumstantial background. The result is sometimes impressionistic, at times analytical, occasionally measured, even flippant and sketchy.  In a culture, where images dominate everything, it is important to spend time in arresting visuals in words. This meditative exercise allows one to stop for a while to admire or to understand the significance of a single garment in a sea of stuff. If fashion is a reflection of our society, what can a single outfit tell us?

Simple in its appearance, but full of contradictions and meaning, look 30 of the Céline s/s 2013 show could be used to unravel a number of ideas central to fashion. Different perspectives allow for different readings of the look. Whilst at odds with each other three different garments in three different textures are central to the composition of this outfit.

The mid calve length black dress is unassuming with a discreet V-neckline and fitted armhole. The quality of the fabric allows for the interplay of sheen and matt livening up the simple surface.

Against this closefitting dress, the leather knot bangles embracing both of the arms seem uncomfortably plump. There is nothing subtle about the proportions of this unusual accessory and even the light blue colouring appears passive aggressive.

But the primary red, mink fur-covered shoes steal the attention, why else would they be featured 3 times in the January 2013 issue of Vogue US with no trace of the dress or the bangles. Symbolically, the design opens up a discussion about femininity by playing with simple clichés. The shoe shape has not been challenged as it takes on an expected form. The mink pelts covering the shoe have been arranged backwards in order for the fall of the fur to compliment the shape, with fur pointing towards the tip of the shoe. The fluffy fur, is not just unexpected, but gives the otherwise unchallenged heel shape, cartoony proportions.[ref] 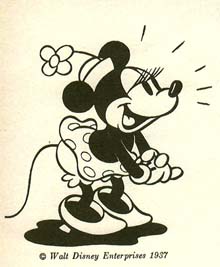 [/ref] Much in the way that Meret Oppenheim’s teacup, saucer and spoon covered in fur titled Le Déjeuner en Fourrure,[ref]

Source: The Museum of the Modern Arts, New York

[/ref] the combination of an ordinary object covered in something not ordinarily associated with the product, is what elevates these two products. Oppenheim’s  ‘Breakfast in Fur’ is a surrealist piece, closely related to Freud’s concept of the ‘fetish’ in which an ordinary object becomes a fetish because we project our desire upon it. The piece was born in 1936 as a result of a conversation this 23-year-old artist had with Picasso in a café. Picasso admired Oppenheim’s fur covered bracelets and both artists started to dream that everything could be covered in fur; even, Oppenheim suggested, “this cup, saucer and spoon”.

The relationship between art and fashion is much discussed and these fur-covered heels are begging to be included in the debate. As part of this, the function of a fashion object is often called into question much in the way Surrealism did by combining the ordinary and the unexpected. The founder of Surrealism, André Breton, writing in his seminal essay ‘The Crisis of the Object’ (1936) demanded that everything should be given a different function as a sign of rebellion and that utilitarian objects should undergo a process of mystification – ‘the mad beast of convention must be hunted down’.[ref]Breton, André (1936) The Crisis of the Object’ in Surrealism and Painting. Boston: MFA Publications p.279[/ref] By covering the heels in fur, the creative director of Céline, Phoebe Philo, provokes questions echoing Breton and Oppenheim. Whilst the illusion of wearability is certainly supported by the spreads in US Vogue (as a model is seen standing outdoors sporting the shoes and no doubt they will also appear in Céline shops [ref]…‘price on request’ guides the image credits in US Vogue…[/ref] and some will probably buy them), the function is questionable. It is easy to wonder if these shoes are actually meant to be worn or were created just for the show – which of course is not the same when it comes to fashion.[ref] 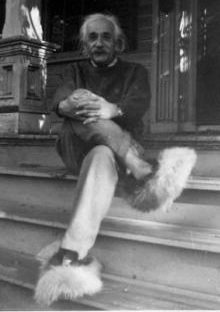 The simplicity of look 30 fools the eye as everything is contradicting, but not fighting, against each other. The shoes absorb the humour, sexuality and provocation leaving the dress to shine in its humble beauty – better this than the other way round. Whether we do a descriptive, symbolic or art-based reading as our starting point, this of course is only a fraction of what could be said about look 30 What would a reading based on value or ethics reveal to us? Or the use of minimalist principles as a starting point with the focus on the dress? Indeed, a simple outfit can be interpreted in different ways. But it’s also important to remember that however much we hope to understand fashion objects, they are ultimately produced to be worn, bought and consumed. Around the objects, we have this intriguing world of fashion with its hierarchies, rules and habits, which only add to the richness of fashion culture. 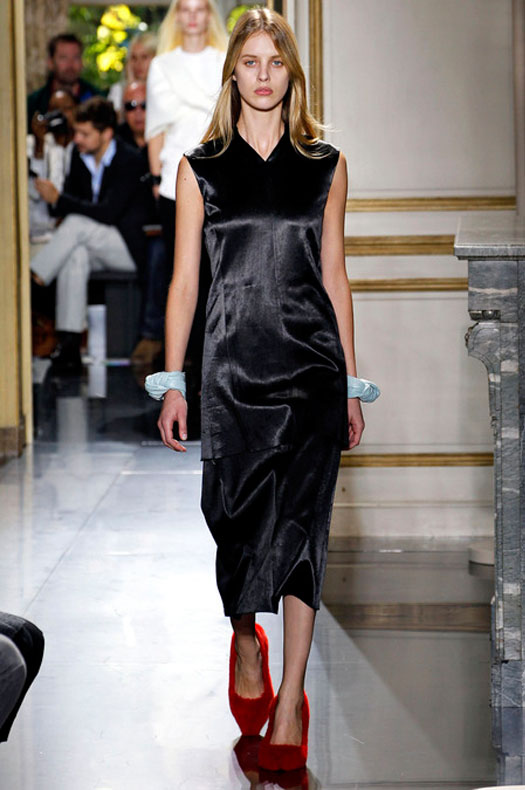 Tags: catwalk review, Celine, s/s 2013
Posted in UNRAVELLING… | Comments Off on Celine S/S 2013 – Look 30
This website uses cookies to improve your experience. We'll assume you're ok with this, but you can opt-out if you wish.Accept Read More
Privacy & Cookies Policy
Necessary Always Enabled